There are a few varieties of the GTX460. The main difference is in the memory sub-system. The 768Mb cards have a 192 bit memory controller and the 1Gb cards have a 256 bit memory controller. The other difference is in the cooling system. Evga has a couple of cards designated as EE (external exhaust), meaning they blow the air down the length of the card and out the back.

This one is an evga 768-P3-1362 model, which is one of the 768Mb cards but factory overclocked. From looking at the stats from GPU-Z it seems the memory controller isn't being stressed much by the GPUgrid app. It hovers between 15 and 17% use. Temps are being reported as being 50 degrees C under load, so fairly cool when compared with the GTX2xx cards.

As mentioned in the previous post it seems most software doesn't understand it has 336 cuda cores. They think it has 224 and therefore its under utilised. Even GPU-Z 0.4.4 reports it as having 224.

It was straight out of the box, take a few photos and then off to work. I swapped out the GTX275 from Spock as its the nearest equivilent card I have. Installed the driver and we're off and running. 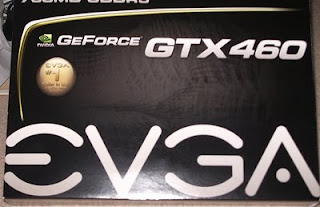 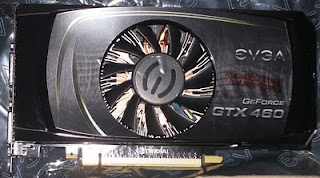 Connector end
Showing the dual DVI plugs, a mini-HDMI and you can see some of the heatsink. 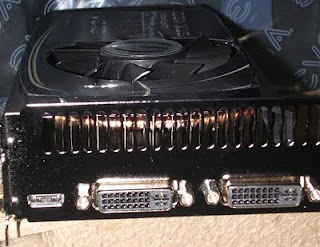 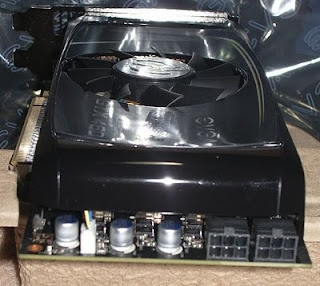