Last weekend it was off to the computer shop with another one of the Core 2 quad machines and I brought back a P8Z77 with a 3rd generation i7 and 8Gb of RAM. I still have 2 more to replace.

Basically we're cannibalising the HDD, DVD and power supply to make them. These last three machines still work, its just that they use about 100 watts of power but aren't that fast. The replacements are using about 80 watts and are pretty fast, not to mention having twice the number of cores.

I am deliberately not putting GPU's in these as I want them to be fairly energy efficient although they could be easily upgraded later.


Project news - Seti
Last week their scheduler was having issues and in the end they disabled it. This week they have moved the splitter processes off to another machine in an attempt to improve things.

They are still pushing their Multi-Beam v7 science app in the hope that the extra processing will slow down the work requests but I think all that will do is buy them some time (once they get it rolled out) until the CPU's and GPU's catch up again. It will take a while before the updated science app can be rolled out.


Project news - Einstein
They passed the 800 Tflop processing barrier. This is probably because of people switching from Seti to a more reliable project like Einstein. Of course Einstein has much better funding than Seti.
Posted by Mark G James at 10:52 PM No comments:

As I mentioned in my last post I was going replace the old Core 2 Quad machines with i5's. I did one of them (the one that had a failed motherboard). While browsing a suppliers web site last week I find that they have i7-3770's at a cheaper price that I paid for the i5. The only reason why I got the i5 was because they were supposedly cheaper.

Anyway I have ordered a couple of them and they should arrive during the week. I will be back at the computer shop on the weekend to get the i5 swapped over to an i7. No I don't do them myself after killing two KFSN4 motherboards. I am happy to do other bits like install Windows, change drives, etc, just not the CPU's.


Project news - CPDN
ClimatePrediction are not giving out work and won't be for some time. They are planning to upgrade their BOINC software to the current version. Unfortunately theirs is a fairly old version so it will take some planning and testing. They have over 100,000 work units out in the field, but given they have 1 year deadlines on some tasks it could be a fair while before reissues of failed work units happen.


Project news - Einstein
They are coming up to the end of their current Gravity Wave run so there may be shortages or work available. They have also suggested they will be overhauling the website soon.

There is a notice that their test site (albert@home) will be effected by a planned power outage with einstein@home potentially also being effected on Sat 17th of November from 7am to 2pm local time.


Project news - GPUgrid
They are trying to get to a cuda 4.2 app only. Unfortunately they are having problems getting some people to upgrade their drivers. This primarily effects users of the older cards (ie the GTX200 family) as cuda 3.1 seems to work better for them. They may keep one work queue running cuda 3.1, hower their cuda 4.2 app can do some additional science that the older app cannot.


Project news - Seti
After a good run last week they are back to struggling mode again. It seems there is some issue where the scheduler times out when the Astropulse splitter is running at the same time. Requests can sometimes work if you set No new tasks so that it reports current work and then allow it to fetch work. That is you seperate requests to report completed tasks from requesting work.

They still have the issue with the network being maxxed out so nothing can download anyway. It gotten so bad that I don't bother with Seti any more as it takes too much hand-holding just to get work.

If that wasn't bad enough they have cut back the hours the staff can work so they aren't around as much to help out with any issues.

One of the old Acer Veriton V7900 machines died a while back. I decided it was time to replace it. Unfortunately the Acer case wasn't really suitable as it has next to no airflow, so I purchased the Fractal Designs ARC midi case. You can see it alongside another Acer. 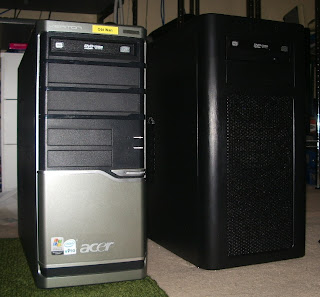 Here you can see them from the top. As you can tell the ARC midi is a bit taller, a bit wider and a bit longer, but not by much. 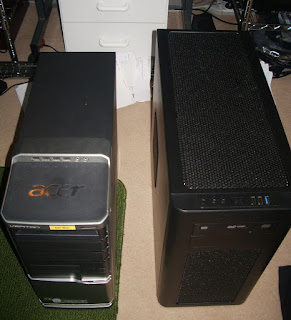 Here is the inside of the machine. Its another Asus P8Z77 motherboard but this time with an i5-3570 CPU as it was replacing a Core 2 quad. Its got the same Noctua U9B cooler as used on the other P8Z77 builds and the same memory. I would have reduced the memory but it seems the distributors don't want to sell 4Gb Kingston Hyper X kits so it got an 8Gb kit. I reused the old hard disk and Seasonic power supply. 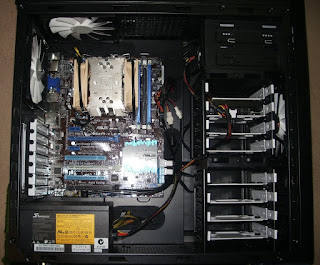 As you can see its got lots of room and a few 140mm fans. The idea was to have something fairly energy efficent so this one is running using the built-in graphics.
Posted by Mark G James at 12:25 AM No comments: