Milestones
None this week. Its been too hot.


BOINC testing
We got 6.12.11 during the week which is meant to address work fetch issues.

Unfortunately I left Maul fetching work for a couple of hours during the week. It went beserk and downloaded too much work. As soon as I noticed I disabled work fetch and promptly put 6.12.11 on it, but now it has to try and finish off the work its been allocated. This has been compounded by the fact its usually off during the day due to the hot weather.


Kirk upgraded
I got an i7-970 cpu during the week. This morning it was off to the computer shop for a quick upgrade. This coupled with a memory upgrade as I had a couple of memory kits lying around from 9 months ago. So now he has 12 cores and 12Gb of memory. This is what it looks like with task manager. 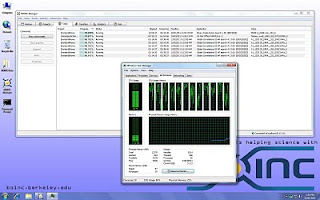 File Server
The old one is starting to have some issues, which isn't suprising considering its 8 years old. Its a hand me down that I was given because the power supply had failed. So i'm getting the shop to build a new box for me using some spare parts that I have and the i7-920 that came out of Kirk this morning.


Project news - Seti
Their upload server died during the week. No, its not one of the 3 new ones. They had to reconfigure the latest new server as the upload server temporarily. To quote one of the Seti staff "its much too good a machine to use as an upload server". Once they get the old server sorted out (appraently the 3ware raid controller seems to have stopped working) they will swap them back.
Posted by Mark G James at 1:49 PM