Introducing Chekov
This Saturday I picked up the other two i7 machines and got them home. One I had previously (Spock) but it had the wrong motherboard so it went back. It was already setup so all I had to do was take it out of the box and plug it in.

The other one has been named Chekov. It however differs from my standard setup in that it has an ATI HD4850 graphics card. Below is the GPU-Z screenshot for it. It was fate really. If all three of the GTX295's worked then I wouldn't have used it on its own, but seeing as one doesn't... 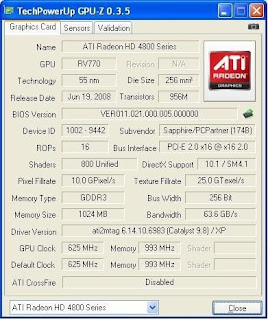 BOINC versions
A couple more BOINC versions were released for alpha testing this week. I don't think this is the last of it as there have been a couple of bug fixes done since the last build. Its up to 6.10.11 which seems fairly stable so far. Having run it for a while on Kirk without any issues I have updated all of the machines to it.

ATI science apps
There are currently only two science apps available for the ATI cards. They are Milkyway@home (which I have attached to) and Collatz. There is a Seti@home Astropulse app being developed using CAL/Brook+ code but it has yet to be released.

CUDA has better software support and is much more advanced than CAL/Brook+ is. OpenCL, while supposedly being supported by both vendors, is even further behind. Unfortunately most of the projects see OpenCL as the longer term solution and don't want to develop new apps.

Future plans for "the farm"
There are a couple of things on the horizon, but not yet released so will have to wait a while for them to eventuate, if they happen at all. In expected release date order they are:

I am using ATI speaker drivers in my laptop and it works fine and no problem since long time.