Spent the weekend reorganising things for the non-GPU group of machines. This is the outcome 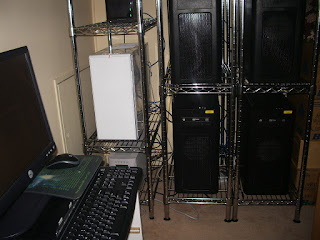 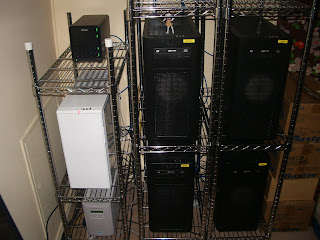 On the left shelving unit the bottom beige box is a UPS. The white machine above it is the file server, with the Drobo FS on top. The other two shelving units have the non-GPU machines. Their specs:


As you can see we used what we could from the old Core2Quad's that these machines replaced. You can also see the KVM and monitor.

Asteroids@home
They released their app for the Raspberry Pi. The work units take an estimated 76 hours at stock speed (700Mhz). I have one crunching away at the moment and hopefully it will be done by the end of this week. I also did a modest overclock to 800Mhz.

Einstein@home passes 1 petaflop
Sometime shortly after January 1st 2013, Einstein@Home passed the 1 Petaflop computing-power barrier. To put this in context, according to the current Top-500 computing list (dated November 2012) there are only 23 computers that deliver this much computing power.

Regarding BOINC on the Pi, thought this might interest you: