Again hot is the word this week. Mostly in the 30's. As a result the majority of the farm was off although the non-GPU machines got a few days of work done.


Pi stuff
The Pi stayed running throughout this. I have ordered some heatsinks for the Pi. There are 3 components that get hot as you can see from the thermal image below 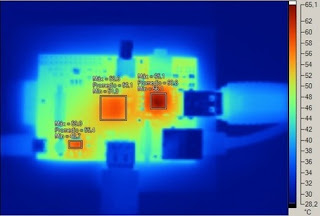 The USB ports are on the right side and the chip to the left of that is the network/USB controller. As you can see its the hottest, represented by the red colour. The square chip in the center of the board is the CPU. The one on the bottom is a voltage regulator or capacitor.

My 2nd Pi (revision 2, B model) has completed 4 Asteroids@home work units so far. Its averaging 67 hours at the moment. I have its overclock set to "medium" according to Raspi-config. Once the heatsinks arrive and the weather cools off I will look at increasing the overclock.

In case you missed it Daniel Carrion has a blog for the Raspberry Pi. On there he has links to a number of projects science apps compiled for the Pi with the necessary app_info and instructions on how to install them. The link is:
http://burdeview.blogspot.com.au/p/raspberry-pi-boinc-project-ive-created.html
Thank you Daniel for doing these apps.

Suprisingly nobody has a case with fan forced airflow for the Pi. Of the designs I have seen there are aluminium ones, wooden ones, cardboard ones and plastic ones, but none with a fan. They all assume it doesn't get that hot, but if you put your finger on the network/USB chip it will burn you. I might need to come up with a case of my own, ideally holding a number of Raspberry Pis. The nearest one I have seen with multiple Pis is the Lego Supercomputer:
http://www.southampton.ac.uk/~sjc/raspberrypi/


BOINC testing
7.0.45 came out yesterday. There are some tweaks around the work-fetch when excluding GPU's. I will put it on one machine and see how it goes.


Project news - Einstein
They have released a new BRP4 science app that can now use compressed data files. If you are running with an app_info you'll have to go and update it yourself.  The new app is able to handle both compressed and un-compressed data files They don't expect to turn the compressed files on until next week, however once they do it should reduce the downloads significantly.
Posted by Mark G James at 10:44 AM