I hit 8 million for all projects today. As well as that tonight I hit 2 million credits for GPUgrid. Below is my BOINCstats image and my GPUgrid certificate. BOINCstats only updates once a day so it doesn't think GPUgrid is there yet. 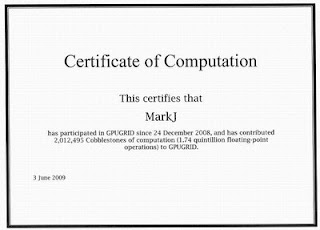 In other news I have started testing the latest BOINC version. I know I said that I won't be testing it, but it has a couple of fixes in it that are useful. As of tonight its up to 6.6.33.

My Seti 10 year anniversary T shirt arrived in the post yesterday, so i'll see if I can organise a photo and put it online.
Posted by Mark G James at 11:08 PM