Despite a quiet week on the computing front I managed to hit the 20 million milestone this week. Below in a FreeDC image of my latest stats. 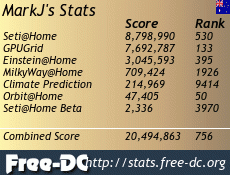 Maul in the shop
Given all the problems getting Maul to recognise 6Gb of memory its back at the shop. A google search turned up some forum post mentioning "bent pins". This would suggest a bent pin or two on the cpu socket. Seeing as the shop put the machine together they can sort it out. ASUS provide a 3 year warranty as do Intel, so the components are under warranty.


Seti long outage
I had some Seti work on Maul which I have been trying to get off it before sending it to the shop. Unfortunately they have had a few problems, one after the other. I managed to upload the results, however couldn't report them. Its been like that for about 4 days now. I have set the other machines to No New Work for Seti so they don't bother until the project is back to normal.


Fermi
While I was in the shop dropping off Maul I had a discussion regarding the upcoming Fermi (aka GF100) gpu chip. They have been advised by their supplier to expect some stock at the end of March. This initial chip is supposedly 20% faster than a ATI 5870. It is expected to be followed in May with another version that is 30% faster. After that they are expecting a dual-chip card to come out. All are meant to be faster than a GTX295. No indication on if they will actually have stock or how much they will cost.


Intel i7-980x
According to web reports these are due out on the 16th of March. Apparently slated for the Mac. Its a hex core with hyperthreading, so 12 cores on a chip. Its clocked at 3.3Ghz. Indicative pricing is $999 USD. Given the pricing I don't think i'll be getting one anytime soon.
Posted by Mark G James at 1:17 AM