I finally hit 100 million for GPUgrid. Below is my certificate. Crunching continues... 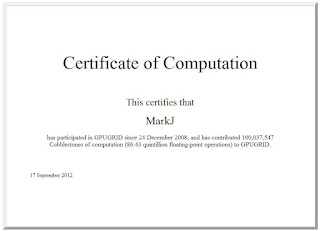 HD 7770
The old HD4850 that I have only supports OpenCL 1.0 and none of the projects use 1.0, so I bought a HD7770 during the week. The idea was it could run OpenCL apps as they are supposedly pretty good. Well they aren't.


Upgrades
As you would have noted in the last couple of weeks I have been updating some of the motherboards and prior to that I replaced the GTX570's with GTX670's. Now they have been completed that leaves the remaining GTX560Ti's to be replaced. I have been looking at the GTX660 (not the Ti). That would bring the peak power down from 170 watts to 140 watts and should give a performance boost as well.
Posted by Mark G James at 11:09 PM