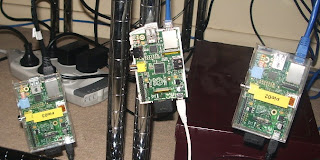 There is also a 7.0.50 for the Android out. This is very much a work in progress. There are some issues about battery overheating they need to address, and of course the devices are usually even slower than the raspberry Pi.
Posted by Mark G James at 10:16 PM

For power for your Pis why not tap +5 off one of the power supplies in one of your crunch boxes. I realize you shut them down during hot weather but perhaps you could leave one running but suspend all the BOINC tasks. Another way is to remove a computer power supply, perhaps from an old PC that's on its way to the trash bin, and modify it to run disconnected from a PC mainboard. I did it once and it's quite easy. All that's required is a resistor from one the leads to ground plus an inductor. I found the instructions on the 'net somewhere. In the end I got like 11.9 volts on the 12 volt leads which is a little shy of the mark but adequate even for powering a disk which I did not do anyway. The +5 was solid 5 and that's all you need for the Pi, I believe.

Another idea is to find a very old PC (tons of them at our local landfill) remove the disks and motherboard and install the Pis inside it. Modify the power supply as mentioned above. Cut holes in the sides of the case for the LCDs to poke through. You could replace the sides with plexiglass and avoid the need for cutting the rectangle for the displays but you would want to drill holes for screws to mount the Pis and drilling plexiglass isn't easy, it tends to crack. The steel sides avoid that problem.

I have a hand tool called a nibbler that is perfect for cutting holes in the middle of thin sheet metal. You can also put a very fine tooth hack saw blade in a jig saw and cut the holes but you must remember to hold the work tightly to the table or it will vibrate so bad it won't cut. An extra pair of hands or some deep throat clamps help.