This is the new 9800GT card, somewhat different to the one I bought previously. Its the same brand and model, but I am told that its a 2nd generation one. It certainly runs hotter than the old one (about 7 degrees hotter) despite the larger heatsink/fan. It doesn't appear to be any faster than the old card. It doesn't look anything like the previous one either. I much prefer the older card. 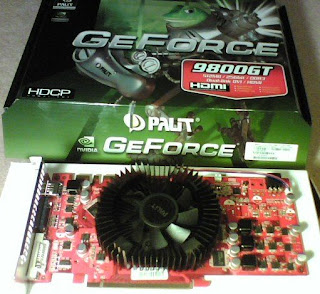 Here is a closer shot, sorry about the glare from the light. 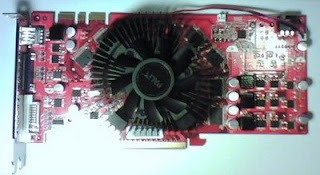 Its now installed in Luke but not without its dramas. Firstly I couldn't get the backplane retaining clip back on. Then while trying to get the clip back on I knocked the recovery switch out (just as well the machine was off).

The driver disc that came with it has updated drivers. It didn't install vtune. So I used the disc from the older one and installed it. BOINC promptly trashed all its cuda work units when I restarted the machine (the older drivers aren't cuda compatible). I then upgraded the drivers to 180.48, which I had downloaded from the nVidia web site a while ago. I have since downloaded even later drivers (182.06) but am yet to install them.
Posted by Mark G James at 9:08 PM