Rpi Bramble
The Pi farm or bramble as the Pi users call them, consists of 11 Raspberry Pi 3B’s. One acts as a support node for the others and has a PiDrive connected. The other 10 are compute nodes. The support node runs a proxy server and as a time server.

Five of the compute nodes have had my fan modification done to them where I cut a hole in the top of the official Pi case and mount a 40mm fan. The GPIO pins provide the power for the fan. The other five sit in front of a desk fan with their top off in order to get air flow. All have copper heatsinks on the SoC. For details see “Mod my Pi Case” http://markjatboinc.blogspot.com.au/2016/04/mod-my-pi-case.html

I have two 5 port USB chargers providing power. I only use 4 ports as the charger reduces the current when all 5 ports are used at the same time. They are Astrotek USB smart charger model AT-UPS-008 or 008B. I had to buy the USB cables so I got the sort with an on/off switch from eBay. The remainder use the official Raspberry Pi foundation power brick.

Networking is provided by a Netgear 24 port switch plugged into a domestic ADSL WiFi router. I use the 100Mbit ethernet and disable WiFi and Bluetooth on the Pi’s.

RAC (recent average credit) is around 5100 for them running Einstein BRP4 work, so a bit over 500 for each compute node. I use BOINCtasks on a windows PC to monitor the farm and control the BOINC client on the compute nodes. 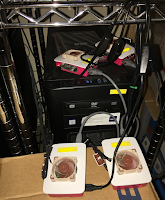