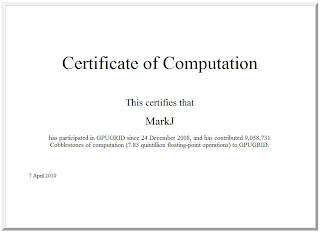 
GT240 cards
I was looking to get 2 or 3 of these to replace the aging GTX260's that were in Maul. Apparently the GDDR5 ones are about 2/3rds the speed of a GTX260, which is pretty good considering they have have less than half the number of shaders (now known as cuda cores) of a 260. They also use a lot less power and are single slot cards (well the evga ones are). The shop are supposedly finding out more details (like pricing and availability) for me.
Posted by Mark G James at 10:14 PM