This week has seen some hot weather, up to 38 degrees in Sydney. As is normal when it gets this hot the machines get switched off during the day and turned on at night when things cool off. This week was hot for a few days so the "farm" had a few days off.

Once the machines were back on all the seti work units went into high-priority mode as they had short deadlines. I set all the projects to "No new work" and when they contacted Seti they downloaded hundreds of work units, all with short deadlines. Apparently a bug on the server side as it shouldn't have received any. The machines spent the next day and a half trying to process everything and then there were issues trying to upload results as the Seti internet connection was maxxed out. They seem to have fixed the bug for the time being because I am no longer getting work.

As mentioned in the last post there were a couple of updates during the week:

Plodding along towards 4 million

Nothing much to report this week. The "farm" is currently working its way (rather slowly) to its next goal of 4 million credits for all projects. As I write this its on 3.7 million. This week was rather hot so the machines have been switched off during the day and only get to crunch at night when things have cooled down.

The BOINC developers also think they will be releasing a new version that includes the latest work-fetch changes to better support cuda processing.

The graphics cards I ordered before christmas have yet to turn up. The latest ETA is tomorrow, but i'll believe that when they arrive. The shop ordered a different brand to what I asked for. I have already updated Luke with one of the new power supplies and a case fan in preparation.

NVIDIA have indicated they will be releasing a GTX212 in the 2nd quarter of 2009, so instead of looking at GTX260's for the multi-gpu machine I will probably use these. See my New year plans post below.
Posted by Mark G James at 9:27 PM No comments:

As I mentioned in my previous post the "farm" has been crunching Einstein@home for the last week. It has now reached 1 million credits for Einstein. It's taken 10 and a half months to get to this point. Below is the certificate. 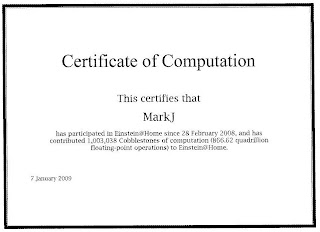 The machines have all been crunching Einstein for the past few days in the hope of getting to 1 million credits. Currently I am on 991 thousand. That would be one days crunching and we're there, but mother nature has other ideas. Its almost midnight here in Sydney and the loft where the machines live is still 28 degrees. There is no breeze to cool things down. Tomorrow is forcast to be 31 degrees so not tonight my dear.
Posted by Mark G James at 11:44 PM No comments:

Just some plans for this year, so far:

Currently I have the one machine (Qui-Gon) running a 9800GT card - See prior posts regarding it. I have replacement power supplies for 3 of the 4 crunchers. I have another 3 graphics cards on order as well. So this should get point one completed fairly soon.

Qui-Gon has a "development" version of BOINC on it (6.5.0) which has a few issues, but at least the CUDA side of things behave. Its currently running GPUGRID in addition to its normal CPU-based projects.

Given my past experiences with the KFSN4 I will simply take the parts down to one of the computer shops and get them to rebuild it. It will probably become a Core 2 Duo or Quad machine who's main purpose will be to feed the graphics cards. Graphics cards use a fair bit of power and generate a lot of heat and therefore need lots of airflow (fans) to keep them cool which also means a lot of noise. This will get addressed once the other 3 crunchers have been upgraded.
Posted by Mark G James at 4:20 PM No comments: