I have Dariks Boot and Nuke running on one of the former GPU compute nodes at the moment erasing the hard disk. Its only been going for 16 hours so far with an estimate of another 6 hours. I then have to repeat the process on the other node before selling them.

The former GPU compute nodes got their RAC (Recent Average Credit) up to 75,600 for Seti so the new ones need to beat that, despite the fact they have less cores. The first one I replaced is currently up to 58,600 and still climbing.

I need to plug in the power meter to get an idea of how much electricity the new ones use. In theory they should be about the same as the old GPU compute nodes but as you can see there are a few differences between them.

Here are some pictures of the latest build. Its a GPU compute node. The last picture is the old and new compute nodes side by side. 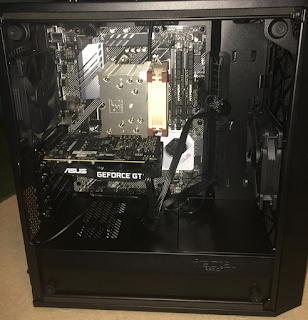 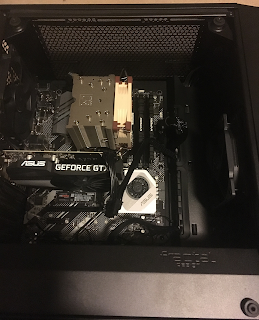 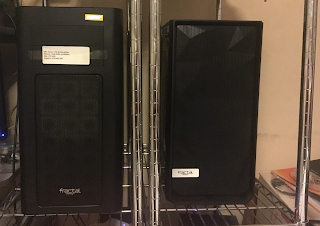 
New GPU compute node
I got the parts for my new GPU compute nodes. They're Ryzen 3600's on X570 motherboards and will be used to replace the existing Ryzen 1700's. I have assembled the first one and its been running for 2 days now. The graphics card was swapped out of the older machine. Despite having two less CPU cores than the machines they replace they're faster so the amount of work being produced seems to be about the same.

I have an issue with the memory thinking its slower than it really is. I purchased DDR4-3200 and the machine is telling me its DDR4-2400. I have raised a bug report with ASUS regarding this. The issue of later kernels (5 or later) not being able to boot doesn't effect me as Debian is still using a 4.x kernel at the moment. I expect there will be a few BIOS updates to resolve issues like this.

Given this success I will order parts for the other 3 GPU compute nodes. I also need to order a couple more GTX 1660 Ti's as I only got two last time and I have four GPU compute nodes. The supplier has run out of stock of Ryzen 3600's and X570 motherboards already so it might take a while for the parts to arrive. I will post some pictures of the new builds in a separate blog post.

The idea is to have this backing up to the slower (disk-based) storage server which has a much larger capacity. The disk-based storage server has more drive bays and hard disks hold more data. Both servers have dual 10GbE networking.
Posted by Mark G James at 6:46 PM No comments:


Ryzen 3 launch
Tomorrow (Sunday the 7th of July) we're expecting the official launch of the 3rd generation Ryzen. AMD have already released some information but not the full line up so it will be interesting to see what models they have available.


Debian Buster release
Today is meant to be the official release of Debian Buster, even though the Raspberry Pi foundation released their version of it, Raspbian Buster, last week.

I downloaded the latest installer (RC2 at the time) from Debian and clean installed it on one of the i3's that I am using as a guinea pig. It couldn't display the desktop properly so I've raised a bug for that. I had a problem with ntp always using the DHCP supplied server which was also raised as a bug. I suspect they have changed the way they start ntp so its possible its just a configuration issue. I can live with the ntp issue for the time being, but the desktop display I consider a show-stopper so I will be sticking with Debian Stretch for a while.

I was reading a review of a Gigabyte branded flash-based server R181-NA0 here which prompted me to ask for quotes. It seems nobody sells the Gigabyte ones in Australia.

I had considered the ASUS Hyper M.2 card but even if you put 4 x 2TB NVMe SSD's on it and run them in a RAID configuration you can't get past 6TB usable unless you have multiple cards. The Hyper M.2 only works on their motherboards and needs a PCIe x16 slot.