No milestones reached this week, just the usual crunching.

This suggests to me that they have more crunching power than they require. At present I only have one machine doing S@H work so it will spend more time doing other projects. They already have issues supplying enough work to keep it occupied. We will see if this causes much grief. There is certainly much angst in the forums.


Internet throttling
This week I got my 1st throttle warning email from my ISP. Apparently they still had me listed as being on a 50Gb plan, despite my upgrading to the 100Gb plan when it came out over 15 months ago. Seeing I was no longer in a contract period and they now have 130Gb plans which don't count uploads, I switched to it. This should save me from future throttling.


Hardware issues
Maul still reboots from time to time. It seems to last about 3 days at a time. I still haven't managed to work out why. Since installing the newer nvidia 257.21 drivers it seems to be more stable, even though the times when it has rebooted it wasn't even doing any GPU work. Its also the only one running Seti work.
Posted by Mark G James at 10:42 AM No comments:

GPUgrid reaches 15M
This weekend I passed the 15 million milestone for GPUgrid. Things are bubbling along nicely there. See certificate below. 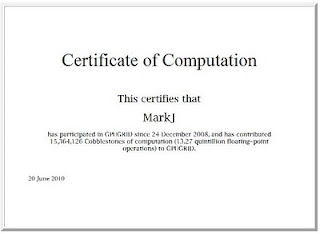 Seti and Seti-Beta woes
The BOINC developers were testing a number of changes to do with DCF (duration correction factors), work fetch and credit normalisation on Seti-Beta. They then seem to have implemented it on the main project without any warning. This is causing a number of issues with no credit being granted and machines not getting work any more. The DCF also varies wildly. All in all a total stuff up. From reading the forums a number of users are getting upset.

Fortunately I have only one machine doing Seti now, so i've simply set it to no new work and its concentrating on Einstein. I'll look at it again next week and see if they have managed to fix their issues. No point stressing about it and there are other more useful scientific projects that I can help.


CPDN
ClimatePrediction are now well into the Famous work units. I've managed to complete a few. They typically run for 260 hours on my i7 machines. I have disabled the smaller HADAM3P work units (they normally take 60 hours) as the project wants to get the Famous work completed in 4 months.


Maul
Well this machine is still playing up, typically rebooting at least once per day. I'll look into replacing the power supply and maybe the case next week.


Future hardware
At the moment i'm waiting to see the GF104 GPU's from nvidia. There are a number of rumours about their specs and pricing. The GTX460 sounds like it might be the card to go for when they become available. Expected release date is either June or July.

The i7-980x doesn't look like its going to drop in price any time soon. They are just too expensive at this point to bother with.

Still nothing from LucidLogix regarding their Adventure 2000 or Adventure 2500, so it looks like they are simply vapourware.
Posted by Mark G James at 1:09 PM No comments:

Its been a fortnight since the last update, so here's the news since last time...

GPUgrid errors fixed
The 2 machines that have GTX295's were getting errors when GPUgrid released their new 6.05 app. I tracked it down to having issues with SLI being enabled. If you disable SLI in the nVidia control panel they work fine, not to mention being a bit quicker.


Adventure 2500
I was keen to get hold of the LucidLogix Adventure 2500. Its basically an extension of the PCIe bus to an external box which provides an additional 4 PCIe slots. Emails to their sales department have gone unanswered.

We were discussing it and a similar product by Cubix over on the GPUgrid forums. The Cubix guys provided some additional information, but we can't get any information from LucidLogix.


BOINC versions
6.10.56 became the official version. Since then there is a 6.10.57 with a minor change to do with elapsed time calculations. I've put 57 on four of the machines and its working fine.


Mauls woes
He's paying the price for being bad. Well not really. It came back a fortnight ago. Since then its done its random reboots for no apparent reason. I've replaced the power cable and extension lead that he's plugged into but that doesn't seem to have made any difference. I even removed the 3rd GT240 from it in case that was causing problems.

I'm beginning to think it might have something to do with the case wiring as since the last time it was off at the shop the light in the power switch hasn't worked and the USB ports on the front panel have stopped working. Its a CM Stacker 830 case which is mostly aluminum and can be prone to short circuits. They are now discontinued unless I want the nVidia version (has an nVidia logo on the front and the grills are green instead of the usual black colour).


Weather
Getting cold (good for computers) and wet (not so good for computers). However managed to have 4 machines up and running for the last few weeks. This has improved the output from the farm quite nicely, with GPUgrid being the majority of it.


Milestones
I passed 500,000 for CPDN (Climate Prediction Network). It seems they've recently added a certificate shown below. I have also started running their Famous climate models. The HADAM3P models I have run up until now take around 60 hours. The Famous models take 165 hours. The good news is they don't have such huge files to transfer to get one going. 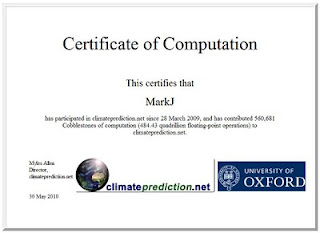