Spock in the shop
This week saw Spock go back to the computer shop so it can be turned into a standard P6T instead of the deluxe v2. While it worked a treat they only have a single PS/2 port on the back which means the deluxe doesn't work properly with a KVM. They also have one of the PCIe slots spaced 3 slots away from the other so would be ideal for a dual graphics card setup, if you don't use a KVM.

Introducing Sulu
I got one standard P6T back from the shop. Its been named Sulu. As you can see I am following a Star Trek theme here. Its off and running with my supposed standard setup of a P6T motherboard, Intel i7-920, 3Gb of RAM, XP Pro and a GTX295.

Dust storm hits Sydney
We had a dust storm hit Sydney on Wednesday. I woke up in the morning and the sky was a red color. As there was a strong wind blowing I had to close all the windows and doors to keep the dust out. I also had the "farm" powered off for the whole day as it would get too hot without opening the window or using the air conditioner.

GPU-Z updated
The guys at TechPowerUp released an updated version of GPU-Z. I let it loose on Sulu now that it seems to understand the single circuit board versions of the GTX295. Below is the screen shot. Unfortunately my assumption that it had a 45nm GT200 chip was incorrect. 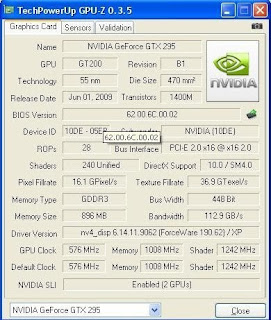 New ATI cards released
ATI released a couple of new cards to the market this week. The HD5850 has 1440 shaders and the HD5870 has 1600 shaders. This means the HD4850 I got about a month ago is no longer available.

Nvidia has also stopped making the GTX260's and GTX295 as they get ready to release a new card. This may mean I can't get the dud GTX295 replaced, but we will see. I might also want to see what they release to compete with the new ATI cards. A potential upgrade coming?

BOINC testing
There were further BOINC versions out this week. We are up to 6.10.9 which I have installed on Kirk. The other machines are all on 6.10.7. The main difference from last weeks one is some bug fixes around the cuda tasks being immediately preempted and some additional work around supporting ATI cards.

Apparently ATI is not providing any help to the projects to support CAL/Brook+ so there are only a couple of projects that currently can use these cards. ATI seems to be concentrating on hardware. Its useless if you have a super fast card if there is no software (apart from a few games) that can use it.
Posted by Mark G James at 12:32 PM 1 comment:

Things just don't seem to be working out this week...

BOINC versions
There were a couple of new versions of BOINC released, unfortunately both have an annoying bug where it preempts cuda tasks. I have only installed it on one machine which will be getting reset back to 6.10.3 after I finish updating this blog.

Ongoing issues with P6T deluxe
I am still having issues with the new P6T deluxe supplied by the computer shop. I have told them to supply the standard P6T motherboard seeing as this one is causing grief. Its also what was quoted and accepted. At the time their supplier substituted the P6T deluxe v2 motherboards as they didn't have stock. This morning I dropped one back to the shop (fortunately its been sitting in the garage all week still in its box). The third one hasn't been delivered yet, so it too will built as a standard P6T.

GTX295
As mentioned last week, one of the GTX295's has problems. I have swapped it out for my GTX275 in the mean time to get the machine going. I downloaded a cuda memory tester app and when I get around to installing the faulty GTX295 back in a machine will run the test on it.

As I no longer have a spare nVidia graphics card I have given the ATI HD4850 to the shop to install in the third P6T. I was hoping to put a GTX295 in there (or the 275 temporarily).

A new record
And you thought I was a hard-core computing person... I spotted this link over in one of the GPUgrid forums. Its about a new world record computer sporting 4 x GTX295 cards. The company in question has an app which can utilize all those processor units.

GPUgrid taking donations
This is a medical science project and they are looking to raise 50,000 euros to fund one of their staff for a full year. They are now taking donations. I got stuck while trying to do a credit card donation last week. I kept my promise this week as they now can take PayPal donations. The highest donor can choose which disease they will concentrate their analysis on next.
Posted by Mark G James at 5:08 PM No comments:

I hit 5 million for GPUgrid yesterday. Below is my certificate. 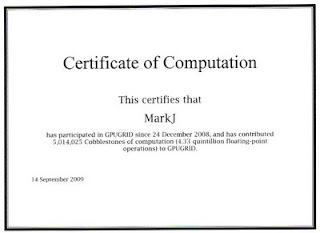 I went back to the computer shop and they supplied a couple of PS/2 to USB convertors. This got the machine up and running. I reinstalled Windows. Couldn't get it to recognise the LAN ports until I installed the drivers from the CD (the standard P6T doesn't cause this much grief). I then could see the network, apply service pack 3. I then downloaded another 51 updates from Microsoft and at least its up to date. Next was to setup windows the way I usually have it. Then installed BOINC. So far so good. Told BOINC to fetch some work so it gets a pile of cuda work from Seti at home and they all start erroring out. Suspend Seti work and let it get a GPUgrid task. It causes a blue screen of death. I reinstall the nvidia drivers and try again. This time it locks up the machine. At this point its gone midnight and I have to work the following day so I power it off and head to bed.

Today after work I come home and decided to swap out the GTX295 with a GTX275 that I know was working. Reinstall nvida drivers one more time. Start up BOINC again and it seems to be working so far. Its even screaming through Seti cuda work at about 2 minutes a pop. Pity the upload server isn't working so I can't upload results but they can wait a while.

My conclusion is the GTX295 is a dud and I will need to arrange for it to go back to where it came from (in Brisbane). I haven't taken the other machine out of its box yet. Hopefully its GTX295 will work. Oh and the name for this one is Spock.

Another strange thing about this one is the shop wired up the fans so they are controlled via the knob on the front of the case. That makes it quite messy inside as they daisy-chained power cables so they could reach. The fans can be plugged into the motherboard. If they are plugged into the motherboard then the computer can control their speed depending on how hot it gets. Thats they way I prefer them wired up. Looks like i'll have to rearrange the cabling next.
Posted by Mark G James at 10:48 PM 1 comment:

Not a very successful weekend

I got one of the new i7's out of its box. Unfortunately the P6T deluxe model doesn't have a separate PS/2 mouse and keyboard port, so won't work with my KVM. I guess its back to the shop on Monday for them.

I also got the extra power cable for the Corsair power supply and it doesn't seem to work either. I can only assume that with 3 graphics cards the power supply is overloaded (despite it being a 1000w).

It was also rather hot so all the machines were switched off. Overall not a very successful weekend.
Posted by Mark G James at 8:39 PM 1 comment:

This week has seen a flurry of activity.

New i7's arrive
Two more i7's arrived to join the "farm". I have yet to get them out of their boxes. I have rearranged the rack to accomodate them. Their specs:


Finishing off
You can see the two remaining quaddies on the middle shelf. The beige coloured machine is the file server. The quaddies are just finishing off the last of their work before I decommission them. 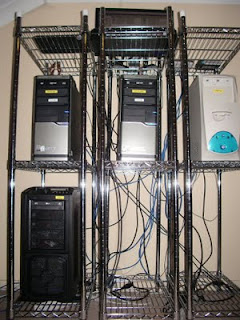 BOINC testing
I have been testing the latest BOINC version as they now support the ATI graphics cards. We reached 6.10.4 but it unfortunately had some issues and I had to go back down to 6.10.3. There have been changes since then so I expect a couple of new versions next week.

ATI graphics card
The computer shop finally managed to get a Corsair PCIe modular power cable in. I haven't opened up Maul to see if it has the right connectors yet. The PCIe end is fine, its the power supply end that is questionable.
Posted by Mark G James at 2:32 AM No comments:

And here is another shot, you can see it has a single fan in the middle, with a heatsink on either end, enclosed within the plastic casing.

Now that the computer shop has given me a couple of power cables for the Seasonic modular power supply in Kirk, I have installed one of the GTX295's. Below is the GPU-Z screenshot of it. GPU-Z 0.3.4 doesn't know some of the details.

It seems to be running a fair bit cooler than the GTX275 that it replaced. This GTX295 is a single circuit board design with a single fan. The GTX275 has dual fans, so I suspect that being a newer card this one may have the 45nm G200 chips. 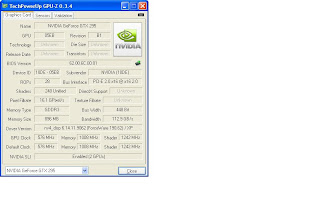 Two more i7's on the way
The shop has yet to get all the parts to make another two i7's, however they should arrive in the next few days. They still expect to be able to build them next week and have them ready for delivery next weekend.

ATI graphics card
Meanwhile the shop are still waiting for the modular power supply cable for the Corsair power supply in Maul. Once that arrives I might be able to get the ATI card working. I had to buy this as a spare part because I have used up all the PCIe power cables that came with it. Maul has two GTX260's and they use two power cables each.
Posted by Mark G James at 9:08 PM No comments: