Milestones
I passed 40 million for all projects this week.


GTX460
I removed the HD4850 from Chekov and installed the GTX460 into it. Its been running the usual mix of 4 projects on Chekov for most of this week. This makes 2 machines that now have GTX460's installed.


GPUgrid "fatty" tasks
They introduced a new batch of 500 workunits. These ones are twice the usual size. I managed to get one on a GTX295 which is looking like running for 12 hours. They are also in the process of ending one work stream and starting up new ones so there is a general shortage of work at the moment.
Posted by Mark G James at 9:41 PM No comments:


Maul not home
I was supposed to pick up Maul after its case transplant, but the shop hasn't done it yet. It looks like next weekend now before it comes home. I did however pickup the 2nd GTX460 during the week.


BOINC testing
We had 6.11.6 released during the week, which incorporates a number of additions for the full functionality of notices. It looks pretty much the same as before from a users perspective. I have it running on Spock at the moment and will look at rolling it out to the others later.


Seti cuda optimised app
The guys at the Lunatics web site seem to be firming the x32f cuda 3.0 app for a release. They have asked us to concentrate on testing it. I previous tested the cuda 3.1 version and a later x32h version. I currently have 2 machines running it.

I managed to trash a cache of Seti work while updating the science app on Qui-Gon to x32h. Normally I wait until its finished all its work before updating a science app but because it was going to be almost a whole day before it finished I did it anyway, with the result that BOINC decided I didn't have the require apps and deleted all the work units.

As you can see from this last one the GPU is loaded up pretty much to the maximum.

Milestones
None this week. Number crunching continues for various projects.


Einstein finds a new pulsar
They seem to have found a new pulsar. Unfortunately it wasn't me, but it does show what distributed computing can do. There is also a suggestion there is a 2nd discovery which is currently being verified.

Link for details of the 1st discovery: http://einstein.phys.uwm.edu/radiopulsar/html/discovery_page/firstdiscovery.html


2nd GTX460
Chekov currently has an ATI HD4850 installed and is mostly dormant. I've ordered another GTX460 for it and will swap out the ATI card.


Seti beta cuda app testing
This is fairly quiet at the moment. A bug has been identified in cuda 3.1 that it is unable to work out which card is doing the work for FFT calculations and thus they fail in mixed-card machines. This will supposedly get corrected with cuda 3.2.


Maul progress
Its been transplanted into a CM storm Sniper case, which will make it look the same as the others at least. Its been done by the shop, but I need to collect it, which means it will have to wait until next weekend before it comes home.
Posted by Mark G James at 10:08 PM No comments: 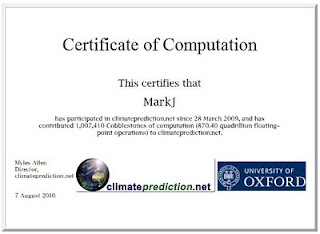 
Seti snap fund raiser
It seems the guys at Seti were going to remove a couple of their old servers due to reliability issues. One of the regular volunteers, msattler, ran a snap fund raiser with various guys donating $1000 each so they could get a replacement server. Unfortunately I missed it (only spotted the message thread this morning) but will see if they need some other bits such as disk drives or memory that I can help with.
Posted by Mark G James at 7:30 PM No comments: