Farm news
The farm continues to process Seti work for the moment. A couple of the Intel-GPU machines are also running the Einstein BRP4 OpenCL app.

This morning I dropped off the P8Z77-V LE Plus motherboard at the shop along with a hard disk and DVD burner. They will be supplying the other bits for this build. This will add another machine into the Intel-GPU cluster.


BOINC testing
I spent a bit of time running 7.2.5 alongside the 7.1.18 and haven't seen any difference in behaviour so far. I have updated a few more machines to 7.2.5 as it seems fairly stable.


BOINC for Android
The Android version has been officially released via the Google Playstore and the Amazon appstore (for the Kindle Fire). You'll need Android 2.3 or later. The following projects have apps for it:
Check the individual project forums for the minimum requirements (memory mostly). 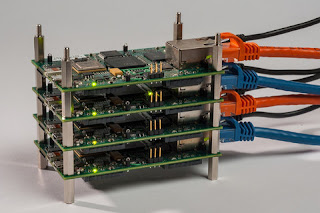 See http://shop.adapteva.com/ for details. They are now also accepting pre-orders for the Parallella-16 (and the Cluster Kits) for October shipping.
And this is a 42 Parallella cluster that they setup with a total power consumption less than 500 watts. For the full details head over to www.parallella.org 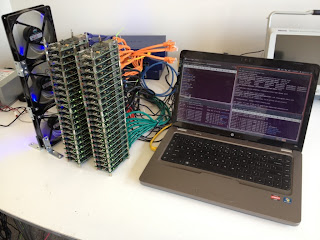 Farm news
This week continued concentrating on Seti with the Einstein BRP4 app on the Intel GPU's. There was a bit of warm spell during the week so I had to stop crunching on the Nvidia GPU machines and its the middle of winter here in Sydney, Australia.

We got a bunch of Windows updates last week which I finally got around to applying to all the machines this weekend. I also took the opportunity to update the Nvidia drivers to the latest WHQL version. Oh and there was a VirtualBox update as well.

Hardware-wise the shop told me they couldn't get the ASUS P8Z77-V motherboards anymore, so I promptly bought one online. Although to be fair the place I got it from also told me they are discontinued. Hopefully that will arrive next week and the other bits can make their way to the shop for assembly the week after.


BOINC testing
We got 7.2.5 during the week. The main change is in the way GPU detection is handled now. There have been a couple of reports of it not working properly. Most of the farm is running 7.1.18 but I have 7.2.5 on one machine which appears to behaving. There have been a couple of unreleased versions (presumably for the Android) since 7.2.5 came out.
Posted by Mark G James at 4:18 PM No comments:

Farm news
This morning I had the file server off at the shop. While not one of the number crunchers it serves the whole farm.

It was in just for a clean. It was starting to get fairly dusty inside, the CPU heat sink and fan in particular. After killing two KFSN4 machines I don't touch the CPU and would rather pay the shop to handle it. The various other bits I clean myself. Anyway its back to normal duties now.


Einstein supports iGPU
They were testing an app for the Intel iGPU's. That is the HD2500 and HD4000 series of built-in GPU's that are on recent Intel CPU's. As there weren't many computers with the required hardware attached to their beta-test project (Albert@home) they decided to release it on the main project.

All my recent machines have iGPU's in them, although I have them disabled on the machines with other graphics cards. That meant the 4 machines that I have under the Intel-GPU cluster were all able to pick up work. It wasn't all plain sailing. It turns out there was a work-fetch bug that provided too much work (there still is in my opinion). Also I had to download the latest drivers from the Intel web site as the first lot of work unit kept failing. However once over these hurdles they have been going flat out for the last couple of days.

Because they work so well I have ordered another machine for my Intel-GPU cluster. They take between 12 and 14 minutes to complete and they require a CPU core to be free.
Posted by Mark G James at 8:22 PM No comments:

Farm news
Since my last post I have managed to finish off those CPDN RAPIT or "full-res ocean" work units. They only take about 210-220 hours each on the fast machines.

I also put two of the WD Blue drives into the machines that were running the left over drives from the Core2Quad machines. Looking at one of the old hard disks it says it was made in February 2008. They still work but its safer to replace them before they become a problem.

Now that I have cleared the CPDN work I have the Intel-GPU cluster concentrating on Seti as its total has dropped below that of some of my other projects. The idea is to run it for a while to help bring the points up to a similar level as Einstein. I still have other machines doing Einstein and Asteroids work, just not the Intel-GPU cluster.


Parallella
They have release their hardware design as open source. They will in a short while be ordering mass production (about 6300 unit) unless there are some last-minute design changes.

There has been some interest in porting the Seti multi-beam app to run on the Parallella, not just from the usual optimised app developers but also from the Parallella design team. The idea is they can show it running an OpenCL app (Seti multi-beam) as a demonstration of what it can do. There is also a fair bit of interest from the crunching community in using them as low-cost computers.