Project news - Einstein
Their O1 search has pretty much ended. It will take a couple of weeks for the remaining work to be returned. The only work units available now are the resend of failed work units. Hopefully they won't take too long to get the next search running in a different frequency range.

For the GPU-based machines I've selected motherboards and they'll have a low power i3 CPU to run them. I still need to find a suitable case. The Fractal Designs ARC Midi cases that I normally use have been discontinued and are proving hard to find.

Nvidia released GTX1080 and GTX1070 graphics cards recently so once the prices drop a bit and supply becomes plentiful I may look at replacing the GTX970's. They don't work on GPUgrid yet so there's no hurry.


Intel GPU drivers
They've released a new driver 4464 for the HD Graphics 530. Unfortunately they still haven't got their OpenCL working so I can't use the Intel GPU's for anything useful. Despite opening a ticket with Intel in February there doesn't appear to be any progress in fixing their drivers.
Posted by Mark G James at 11:14 PM No comments:

Farm status
The farm is divided into 3 types of computers. The Intel GPU's have a GPU imbedded into the main processor, Nvidia GPUs which have added Nvidia graphics cards and the Raspberry Pis. The GPU's can be used for calculations in addition to the CPU however not all projects have apps that can use the GPU.


Project news - Einstein
Now that we've got most of the way through the O1 search they have found that the data is quite noisy and so are planning on cleaning it up a bit before the next search starts. The next search will scan different frequencies.


Pi news
This week I've been running through the Pi's and updating them. There were quite a few updates in Raspbian Stretch and also BOINC 7.6.33 came out. I've been doing them one at a time so as to minimise the impact on their output. They usually get a new computer Id so I need to finish off any work in progress before upgrading them.

I have put the possibly faulty Pi back in service as number 9. I don't have a case for it so its just sitting on top of a cardboard box at the moment. I started off with a clean Jessie lite image on a new SD card and upgraded it so its the same as all the others.

As part of the tidy-up of the Pi's I got a 5 port 40 watt USB charger. I have plugged 4 Pi's into it at the moment and they seem to be working fine. If all 5 ports are used then it can only supply 8 watts to each device and the recommended is 10 watts so it probably can't handle 5 at once. Its just a cheap no-name one that the computer shop had. I will give it a few days to see how reliable it is. I need to get more USB A to Micro-USB B cables if I am going to use these to replace the individual power adapters.


Future upgrades
I was in the computer shop on the weekend and started off looking at a dual-Xeon build however getting parts was one problem (the motherboard wasn't available in Australia). The case for the motherboard was going to be another problem as it was an SSI EEB sized board. Lastly dissipating 180 watts or more of heat from the case was going to be an issue. In the end I gave up on that idea.

I got a quote for another 6 core/12 thread machine using the Asus X99-A II motherboard. It wasn't as expensive as I thought and I already have two like it. However I think I might just get a couple more i7-6700 machines as they are fairly energy efficient and don't produce too much heat. They'll replace the two remaining i7-3770 machines that also have GTX970 graphics cards installed. I will then need to find a couple of fairly low-powered machines to drive graphics cards.
Posted by Mark G James at 8:07 PM No comments:

Added number 8 to the farm. Went to copy backup from another one and write to new SD card only to have WinDiskImager complain new SD card was smaller. They are all Sandisk Ultra 16Gb cards. I ended up clean installing it, starting with Jessie-lite and upgrade it to Stretch and then update kernel which gave me 4.4.12.

I swapped out number 7 thinking it was faulty. Went to upgrade kernel and bricked it. Apparently it wasn't faulty. So clean install from Jessie-lite, upgrade it to Stretch and did a kernel update which now is up to 4.4.13.

Tonight I tried upgrading Stretch on number 1 and bricked it so looks like I am going to have to go through each one of them and clean install Jessie-lite and upgrade them.


Other news
I reorganising the shelving so I could get the proxy server and some of the Pi's off the floor. That bit is done.

I still need to find a better solution for the Pi's. There are few issues having so many of them. The first one is around power cables/adapters. I currently have 8 and need a couple of power boards to plug them all in. The second issue is how to house them. Currently I have each one in an official case. Most of the multi-user ones seem to stack them using something like the Beaglebone which is simply a piece of Perspex in the shape of a bone and a bunch of metal stand-offs. I could put all of the Pi's in a row on some Perspex and then have another layer above with holes to mount the 40mm fans, held up by metal stand-off's. Its just a idea at the moment.
Posted by Mark G James at 10:02 PM No comments:

Nvidia GPUs
The 6 core/12 thread machine have been doing Einstein O1 search until today. Currently they're off.


Pi news
The Pi cases finally arrived this week. They are the official Pi3 case and apart from the LED windows being on the opposite side they're identical to the official Pi2 case. I would have thought they would have a cut-out for the WiFi but they don't.

Pi number 7 seems to be faulty. Its been crashing every couple of days. I've even taken to rebooting it regularly to try and prevent it locking up. I updated the firmware/kernels on all the other Pi's today however on number 7 it bricked it and I had to restore the SD card image. I'll order another couple of Pi3's. One will be the replacement and the other will become number 8. I've only got two spare heat sinks so that will use them up. 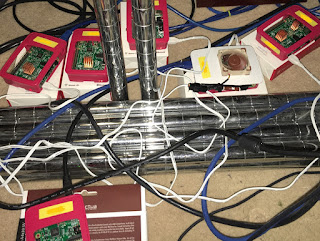 As you can see its rather messy. I have chrome shelving racks that the big machines sit on and that's the legs you can see (with some spare ones lying across the front). There is another Pi3 out of shot sitting on one of the shelves.


Other news
There is a bit of chatter on the forums about the new Nvidia 1080 cards, which from early reports don't seem to be a great advance, at least from the number crunching perspective. Its still early days and may require apps to update to take advantage of them. The 1070 is due out later this month and we're not sure when the lower-end cards will be released.

We've had a bit of wind and rain for the last couple of days, but its set to clear up tomorrow. That is the reason why the 6 core crunchers are off at the moment. I have to keep the loft window closed and it gets too hot with them running.

I have been doing a bit of research into getting a multi-CPU machine. I am tinkering with the idea of a dual CPU motherboard but the 180 watts of heat to dissipate for a pair of Xeon E5-2640v3 CPU's is going to be a problem. Then there is the price tag.
Posted by Mark G James at 6:58 PM No comments: