This is the Parallella board that we're all waiting for. 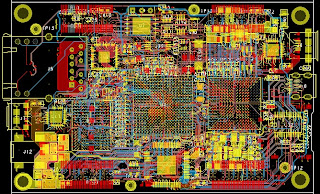 In their latest update they said:

"It took longer than expected, but the first revision of the Parallella board has been sent off to the manufacturer and we will have the first 10 Parallella boards built up and ready for testing by April 15th!"

We will see if they get them ready by April 15th. While I was a backer in the Kickstarter project I expect I am further down the order for the boards as they come off the production line - I didn't pledge that much. However it will be interesting to see what these things can do from a BOINC or number crunching point of view.
Posted by Mark G James at 12:27 AM No comments:

Just a quick update. The Seti and BOINC project computers will be moving to a co-location facility elsewhere on the Berkeley campus. That means both projects will be unavailable. They expect this to happen on Monday the 1st of April and to take 3 days to complete. Hopefully its not an April fools day joke.

Hopefully this will allow the project staff to concentrate more on the science and less on running machines. It may also give them access to a higher speed network connection in the future.
Posted by Mark G James at 7:49 AM No comments:

Not a great deal to report for the last fortnight. The weather is still warm but we had a couple of cool days where I had various machines running, at one point I had all the Intel-GPU machines plus the dual GTX660 machine running.

The Pi's are still crunching away for Albert and Asteroids.

Albert@home have started a test of a new FGRP OpenCL app. The current FGRP app is a CPU app so this is allowing GPU's to assist. It still spends a lot of time using the CPU so you'll need to dedicate a CPU core but as they tune the app this should improve. Its for ATI/AMD cards only at this point.

Asteroids@home have release an app for Android on ARM processors. They are the first project to officially support Android devices.


Seti network congestion
As previously reported their network connection is running at its 100 Mbit limit almost continuously. It seems there is a registry setting in Windows where you can enable a TCP option to improve performance on such connections. This option was suggested in May 1992. Unfortunately Windows doesn't have this option turned on by default but Linux and OSX do. For more information search for "RFC 1323".

To add the registry key cut the command below and paste it at a Windows command prompt. Make sure you do a "run as administrator". After doing this you'll need to reboot for it to take effect.


BOINC testing
We got 7.0.56 this week. just some minor fixes but nothing noticeable from my side. This is a release candidate, although there have been a couple of fixes done since.

I still haven't convinced Dr Anderson that it doesn't honour resource shares despite providing some log files. It is doing this on 5 of my machines and seems fairly consistent. Its doing the exact opposite of the client emulator scenario that I ran.

There is an official port of BOINC 7.0.56 to run on Android. I don't have any Android devices so I haven't tried it.
Posted by Mark G James at 10:51 PM No comments: 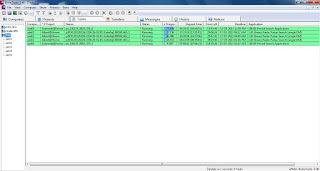