Farm news
At the moment we're winding down the ClimatePrediction ANZ work units. I have two machines left with work to complete and we can't get any more. In the mean time I have allocated the other 3 Intel GPU machines to running Seti.


Parallella news
Carrying on from my last post one of the Parallella's is off and running. They are about 1/3rd faster than the Pi's when running on the ARM. They can also do 2 work units at the same time. Unfortunately nobody has managed to get the Epiphany co-processor to do any work yet. There is a bet between one of the Einstein developers and Andreas Olofsson (CEO of Adapteva) over getting the Epiphany to do a 3*2^22 real to complex FFT in single precision faster than the raspberry Pi's GPU. The deadline is the 15th of September.

The Parallella, like the Raspberry Pi, doesn't have a battery backed real-time clock. As you would have seen from my last blog post it sets the clock some time after booting up. To work around this I had to install fake-hwclock and ntp. The fake-hwclock stores the date/time when shutting down and gets it when starting up. The ntp runs as a daemon and corrects the clock from an ntp server. By default Ubuntu doesn't install ntp, but has one called ntpdate which only runs (delayed) at start up. Commands to do the above:
sudo apt-get install fake-hwclock
sudo apt-get install ntp
suto apt-get remove ntpdate


Pi news
Over the last fortnight I was running the 3.12.19+ kernel on one of the Pi's. The other guys running it have been reporting random crashes. Well it did the same to me with two crashes over a 24 hour period. Apparently the only error messages are output on HDMI so unless you logged in locally and turned the screen saver off you can't see them. It doesn't log much so even then there is very little information to report to the developers.

As you would have gather from my previous post both my Parallella's arrived. As usual there was some drama getting them going.


Hmm looks like it needs to set the clock too.
Posted by Mark G James at 12:09 AM No comments:

Here are the 2 boxes. The left one without a label is the clear plastic case (some assembly required) and the one on the right is the parallella. 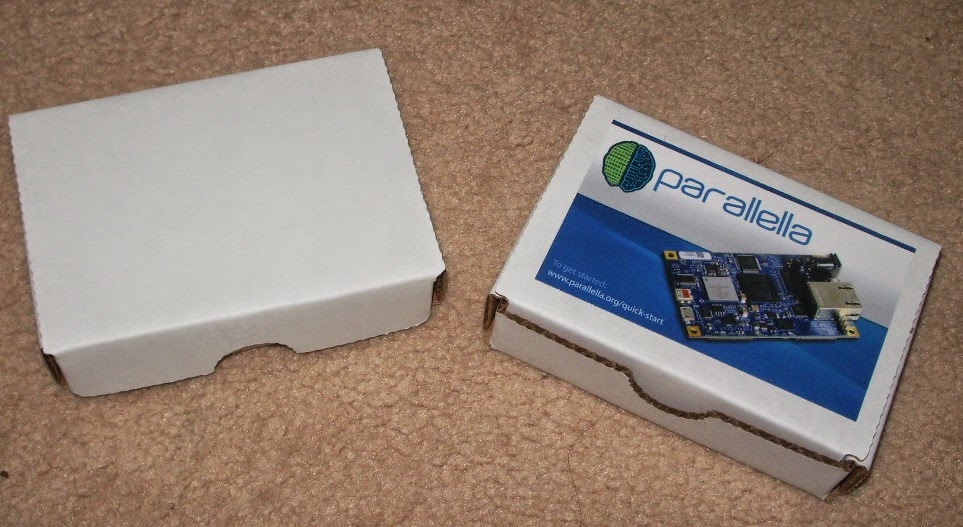 This is what you get in each box. 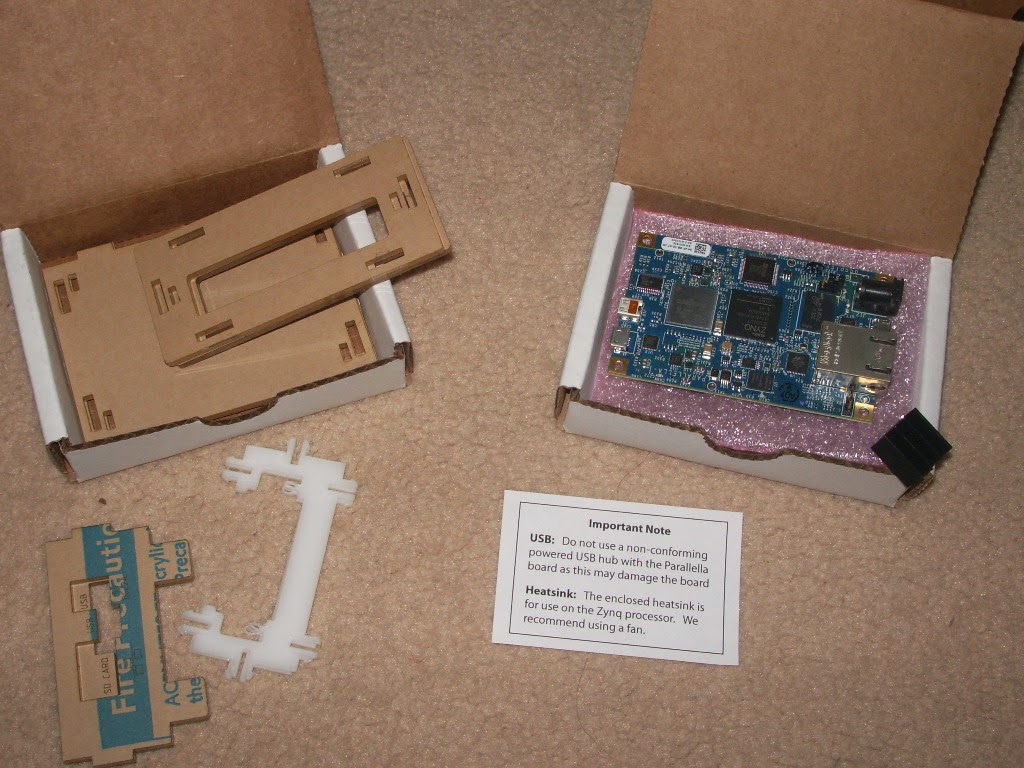 I've peeled off some of the brown protective tape. In the right box you can see the 60mm fan that I am going to install on the top of the case. X marks the spot to drill. 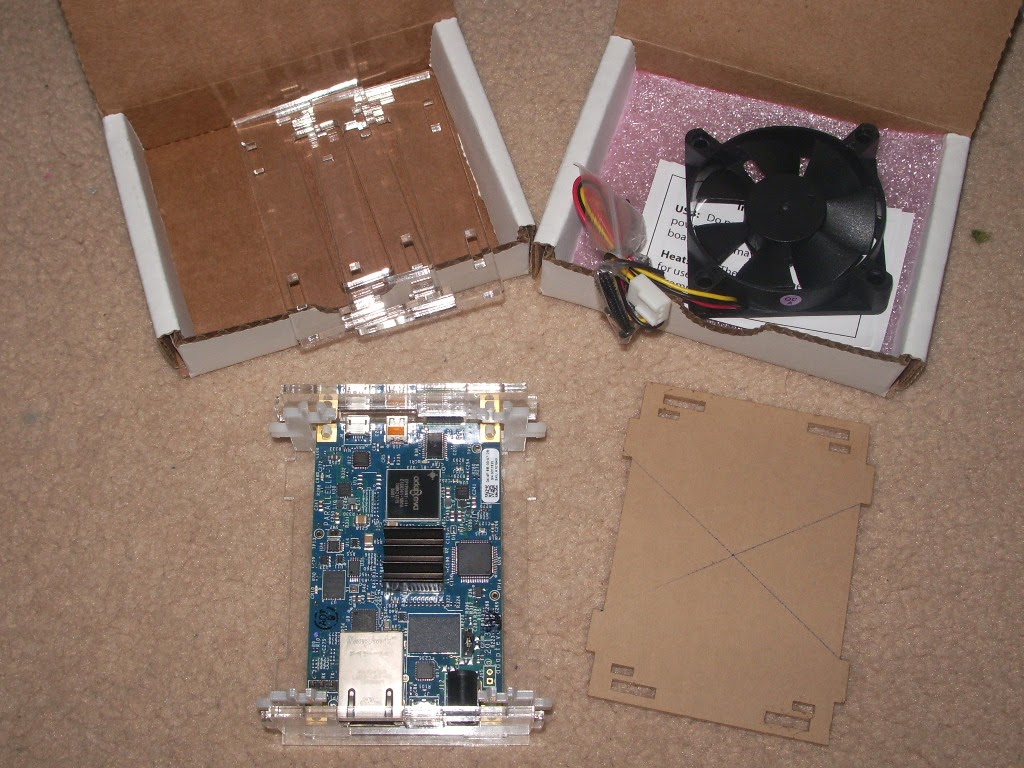 Here is the trusty locksmith 60mm drill bit again and the hole cut through the top of the case. 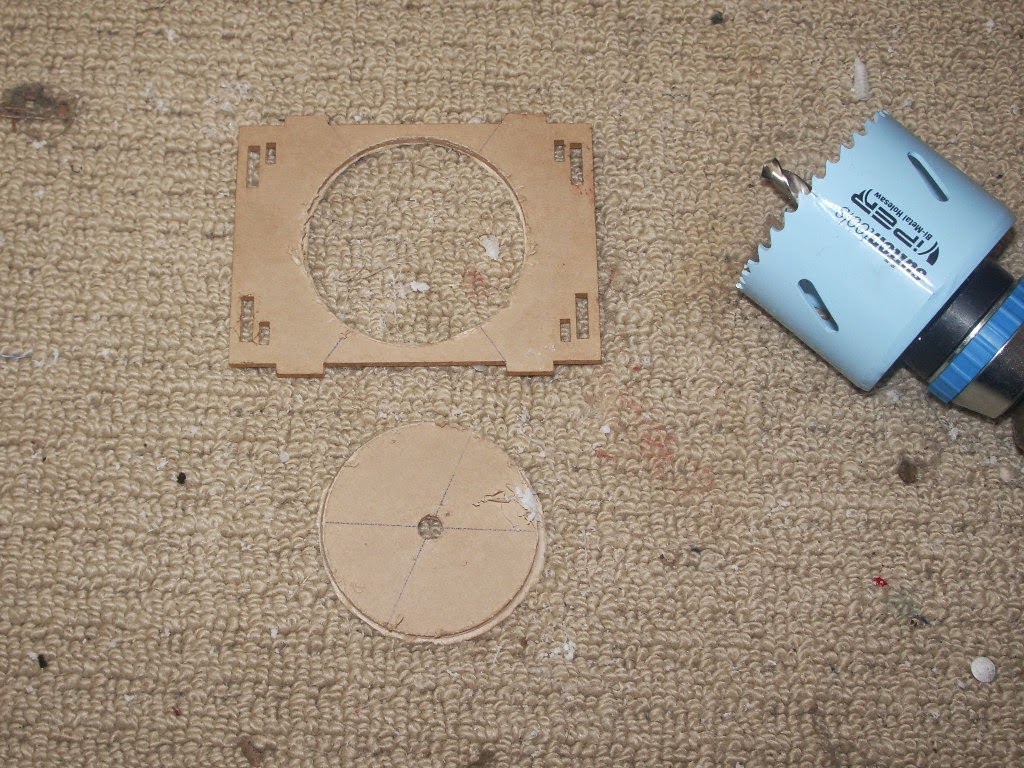 A close up of the 60mm 5 volt fan from FrozenCPU 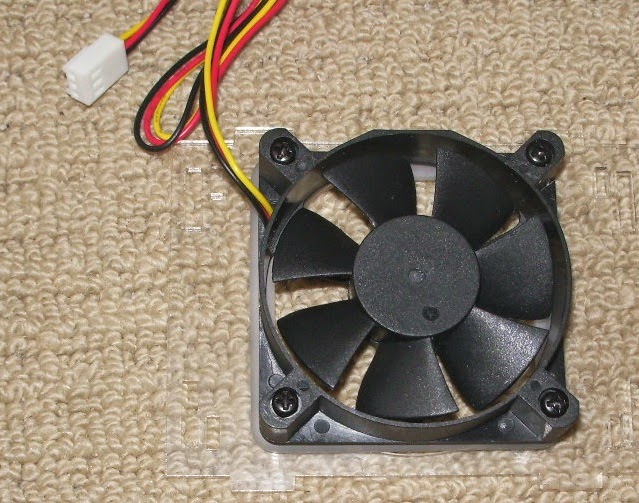 And here it is put together showing the top view. 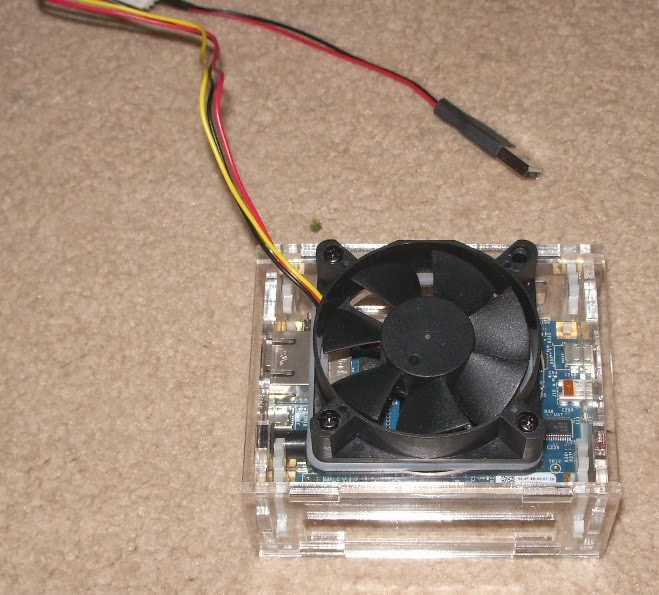 And a side view. You can see the heatsink for the Zynq 7020 under the middle of the fan. 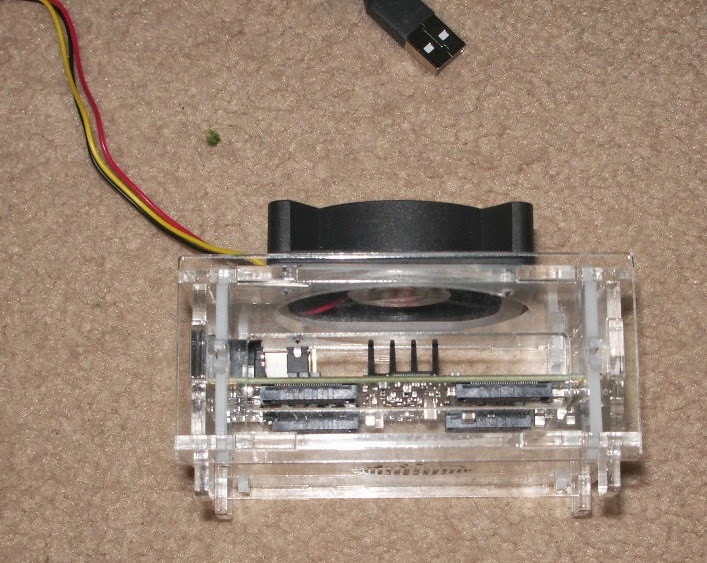 Farm news
We're still running ClimatePrediction ANZ models. They must have finished off the 1st batch last week because I had almost run out of work when they seem to have produced another 5,000 work units, presumably the 2nd batch.

I was running 4 of the ANZ models at a time on the i7's and manually picking up Asteroids work to use the remaining 4 cores. This time I have changed to running 7 at a time and tough for CPU cache contention. I've allowed one free core :-)

Parallella news
They arrived late last week. I have copied the disk image to the micro-SD card and of course they don't want to work. I am now downloading the image again and will try writing it again. Not sure why I am having trouble as its a similar process to write the Raspberry Pi SD cards and they work fine. I've tried 3 different micro-SD cards between both parallella's.

I need to add a fan to the case, something similar to what I did with the Raspberry Pi. The Parallella's need forced-air over the heatsink on the Zinq 7020. Also there aren't any air holes in the case, just some cut outs for the various connectors. I'll share some pictures once I've got one working.
Posted by Mark G James at 11:29 PM No comments: