Seti@home had their 10 year anniversary picnic. Being on the opposite side of the world the nearest I could do is get myself an anniversary T shirt. I ordered one last week and its on its way.

GPUgrid still fails when running the current release drivers with their application. They believe its a problem with the cuda compiler and have passed details onto nvidia. As it might take a while until a fix is available I am considering going back to my original project mix (Einstein, GPUgrid and Seti) and downgrading the drivers on the quaddies. This should also relieve pressure on my ISP's monthly download limit as CPDN (climate prediction) work units are huge when they complete.

The BOINC development team are gearing up for some changes to facilitate BOINC and GridRepublic (an account manager add-on for BOINC) to use Facebook. As I don't use either Facebook or an account manager I am not planning on testing this time around.

I got another 500 watt Seasonic power supply for the last remaining quaddie to get upgraded but have yet to install it.

I have some issues at the moment preventing all the machines from running at once:

This week GPUgrid have been having some problems. Their work units have been failing. They think its caused by a bug in the cuda compiler/hardware on pre-G200 chipsets. They have developed a work-around.

At the beginning of the week I upgraded all the quaddies with the latest nvidia drivers (185.85). This made all the GPUgrid work promptly fail. Given the project were aware of these issues (other people were also reporting problems) I decided to run Seti cuda work only on these machines. As a consolation I downgraded the i7 to the 182.50 drivers and its running GPUgrid work on its two GTX260's.

BOINC 6.6.28 became the "recommended" version, which is good because I have been running it on all the machines for a couple of weeks now. It still has issues with work-fetch but overall its reasonably reliable.

In order to keep the CPU's busy I have attached 3 of the machines to CPDN (climate prediction). This is because BOINC doesn't get enough CPU work and gets too much GPU work. The smallest CPDN work units take around 5 days straight to complete.
Posted by Mark G James at 10:02 PM No comments:

7 million for all projects

Hit the 7 million credits for all projects tonight. Below is my BOINCstats image.

The quest for more credits continues...


GPUgrid are having 2nd thoughts about upgrading to the new cuda 2.2 drivers. Apparently in their testing on some 8800GT cards their work units kept failing. Of course this is announced after I have updated one machine to the latest drivers. I also had to download the latest cuda 2.2 DLL files from the nvidia web site.

It appears that you have to uninstall the old nvidia drivers before installing newer ones otherwise it doesn't quite work. If you don't it still thinks its running the old drivers.
Posted by Mark G James at 9:57 PM No comments:

Apparently I passed the 4 million credits mark a couple of days ago. I only noticed yesterday. Here is my certificate. 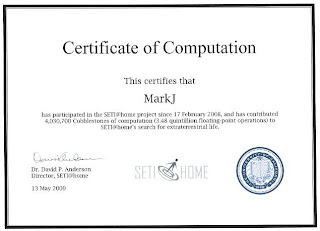 
As I mentioned above Seti hit the 4 million credits mark and kept on going. Also I am close to 7 million for all projects, but not there yet.

GPUgrid are going to update their science app to use the new cuda 2.2 standard. This is causing a bit of upset to some people who can't or won't upgrade their video drivers to the current version. I have updated one machine already and set all the machines to "no new work" for GPUgrid so they can finish off what they have.

Some of the result files produced by a couple of projects are large. Climate prediction has 43Mb result files when it finishes a work unit after 5 days processing. GPUgrid has recently been outputting 29Mb result files and yesterday had a 54Mb file. All this uses up my monthly transfer limit (25Gb peak, and 25Gb off-peak). I expect to exceed my monthly limit and then get throttled this month. I will have to investigate how to get a larger download limit and faster upload speeds.
Posted by Mark G James at 9:53 PM No comments:

It appears late last week or early this week I passed the 6 million credits for all projects. I didn't actually notice until yesterday. Its currently around 6.8 million at the moment so I will try and grab a shot of my BOINCstats image when I get to 7 million. Seti is also closing on 4 million credits.

BOINC came out with a few versions in the last week. We seem to have a version (6.6.28) that resolves the task "thrashing" (see my previous post). I have installed it on my i7 with dual GTX260 cards to see how it handles things. I have already installed it on a couple of the quad-core machines. Looking good so far.

GPUgrid are continuing their HIV protein analysis, complete with 29Mb result files to upload. They take about 20-25 minutes just to upload. I try and return these work units as soon as they have finished instead of waiting for my usual "off-peak" internet time (1am to 7am). I think my internet download limit will be exceeded this month.
Posted by Mark G James at 9:14 PM No comments:

On the 17th of May, Seti@home celebrates its 10th birthday.

Highlights of this week
The text of the Seti 10th anniversary news release can be found at http://setiathome.berkeley.edu/anniversary_info.php

GPUgrid have started an analysis of a HIV protein which I considered a worthy thing to crunch. The work units are somewhat larger than normal. The output files are also rather large. The last one I saw had 29Mb of output to report back. Depending on which of the computers gets the work they can take days or 8 hours.

BOINC 6.6.25 was released with a couple of minor fixes in an attempt to track down the scheduling bugs that cause task "thrashing". That is it will start tasks then suspend them to run other tasks, only to resume the original tasks later. While a number of people have made suggestions (myself included) they all appear to be ignored by the developers.
Posted by Mark G James at 9:14 PM No comments: