Farm News
The GTX460's have been removed from the machines. As mentioned previously they both seem to have failed memory. It turns out they have a 2 year warranty so they should be able to be repaired/replaced under the warranty.

In the mean time the GTX560Ti has been installed in Obi Wan as you can see from the pictures below. It looks almost the same as the GTX460 that it replaced but is almost 1 inch longer. 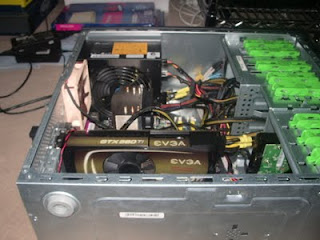 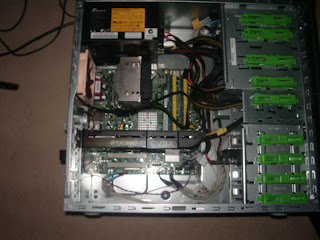 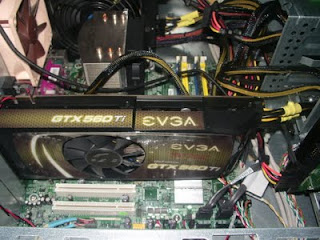 While I was poking around in there I noticed the CPU heatsink was covered in dust, so I gave it a bit of a blow-out using a can of air. It really needs to be removed and the fan taken off to be done properly. Something I will get the shop to do.


Project news - GPUgrid
They are preparing a new science app for release in Fall 2011. The main differences:
- 10% faster on Fermi.
- It should support parallel gpu runs later on
- It drops support to compute capability 1.1 and 1.2 (so it supports from 1.3 inclusive)


Project news - Seti
Their raw data storage raid got itself tangled up last week so no work was getting created while they fixed up the raid and restored the data from an off-site backup. They have now got it going so work is flowing again, although the usual network congestion issues remain.

Speaking of network congestion they have identified a problem with one of their routers. They think it needs a memory upgrade to cope with the number of connections it needs to handle.
Posted by Mark G James at 11:06 PM 1 comment:

Milestones
I passed 42 million for GPUgrid.

At the moment Obi-Wan is running without a GPU (it has on board video). I have ordered a GTX560Ti as a replacement.

As the GT240's in Maul are getting a little dated I am looking for suitable replacements. They need to be single-slot cards. I came up with the GT545 which looks pretty much like the GT240. MSI also make a GTS450 available as a single-slot card, although a number of complaints about fan noise on them.

Project news - Einstein
They have discovered another 3 binary pulsars from the Parkes radio telescope data. That brings them up to 9 so far.

We need another decent size radio telescope in Australia to cover the southern hemisphere given these previously undiscovered binary pulsars. There is a proposal to build a wide-area array (similar to the Allen telescope) in Western Australia but that may not happen.
Posted by Mark G James at 10:39 AM No comments:

Milestones
No new milestones to report this week.

I have put a request out on Freelancer to get the BOINC manager ported to the iPad. This (if it happens) will allow me to control the machines remotely. I can do this from my laptop but I prefer to use the iPad as its ligher, more portable and the battery lasts longer.

Two of the four CPDN full-res ocean work units finished and the other two are running with 200+ hours left to go.

I updated the nVidia drivers to 280.26 on all the running machines. This supports CUDA 4.0 and is slightly faster than previous versions.


New project: Radioactive@home
This is a new project being run out of a university in Poland. They are mapping radiation. To use it you'll need an external sensor that plugs into a USB port, pretty much like EQN does. It runs as a non-CPU intensive task in BOINC the same as EQN does.

The project is in start-up mode at the moment and doesn't have sufficent sensors. After prototyping a sensor, they are now getting some manufactured, however their initial oder was only for 50 and they have all be taken. Their URL is: http://radioactiveathome.org/boinc/
Posted by Mark G James at 1:17 AM No comments:


BOINC tasks
This is a monitoring program that is great for keeping an eye on all the machines from a single computer. Its similar to BOINCview. Its been updated to version 1.09. It can be found at http://www.efmer.eu/boinc/boinc_tasks/


BOINC testing
There is a 6.13.1 being tested. It has some fairly major changes from 6.12.x around the work fetch algorithm and its early days. That is its too risky to try it out just yet.

There is also a 6.12.34 being tested. This has some minor fixes as well as a couple of installer fixes. The windows installer had an incorrect DLL file in the package. The Mac installer has been updated to work with OSX 10.7 (Lion). Maul is running 6.12.34 and I will update the others later as it seems pretty stable.


Farm news
Weather has been warm despite being winter here in Sydney. As a result I've suspended GPUgrid for a few days as the GTX570's generate a fair bit of heat. Instead I have left a few machines (Maul, Chekov with Obi-Wan intermittently) running CPU only work.

Seti is still plagued with download issues (not enough bandwidth and too many users). I can't see any easy fix for this and its likely to take some time before anything can be done.

Chekov has 4 of the Climate Prediction full-res ocean work units running. These take 550 hours or so. Two of them are around 80% done and the other two are a long way off completing.


Project news - Einstein
They have a new gamma ray search running, so work for that has now started flowing. Its a CPU only task at the moment although they have said they are looking at a GPU version.