Milestones
Well this week I managed to knock over another million for GPUgrid. Below is my 40M certificate. 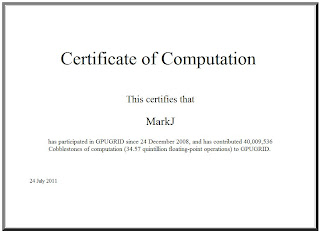 BOINC testing
While I was away 6.12.33 became the recommended version (I was already running it).

We're on another round of testing now for the 6.13.x version. I have yet to download and install it as there are quite a few changes that need to become a bit more stable. The main change in this one is to make the skins, used in simple view, more translatable for languages other than English. There are also some scheduler changes in this.


Farm News
This week was a short week for the farm as I only got back on Tuesday. Nothing much to report other than the weather is better in Vancouver than here in Sydney, where its been raining all week. Now we're into the weekend its finally stopped raining.

The farm powered up first go, except for when I plugged Maul back in and the earth leakage circuit breaker (safety switch) tripped and that was before I had even turned it on! After resetting the breaker and retracing things step by step it worked fine.


Project news - Einstein
We have been processing data from the Parkes radio telescope. They have discovered 5 new pulsars in the data so far. Here is a link to message thread on the Einstein@home web site regarding this: http://einstein.phys.uwm.edu/forum_thread.php?id=8979

As we have now processed all the Parkes data we are transitioning to a new run of BRP (Binary Radio Pulsar) search using new data from Arecibo. There is little or no GPU work available at the moment, but CPU work units are available.
Posted by Mark G James at 9:44 PM No comments: