And here is the news for this week:


Farm news
The farm is running fairly well. I am looking at some machine replacements fairly soon to counter the huge electricity price rises we've had in the last 2 years.

I have two machines (Asus P6T) that are mainly GPUgrid crunchers running 24/7. I recently replaced their GPU's and now I am looking at replacing the motherboards. I am looking at the Asus P8Z77, Intel i7-3770 and 8Gb Kingston memory. This should bring the CPU power consumption down a fair bit. I will reuse the existing bits (case, power supply, etc) to keep the price down.


Project news - Einstein
They have discovered 7 new pulsars. These all seem to be from their Binary Pulsar Search work units. The other types of work units (Gamma Ray and Gravity Wave) don't seem to be finding anything.


Project news - Seti
Seti has been releasing their Astropulse for GPU app. They have currently released versions for the ATI and Nvidia cards with OpenCL support and BOINC 7.0.27 or later.

There are a couple of versions yet to be released that will work with older BOINC clients. Personally I wouldn't have bothered with them, the whole idea would be to give people a reason to upgrade to the later BOINC client. Its not as if they need all the extra computing power for Astropulse because they produce them at a ratio of 40:1 (that is 40 multi-beam work units to 1 Astropulse work unit). Astropulse work units are hard to get normally, now they are almost impossible to get.


Rasberry Pi
These are a small (credit card sized) computer that cost about $35 each. The are based around an ARM processor. Originally developed for the education market in the UK with an emphasis on being cheap. You can find details of them here: http://www.raspberrypi.org/faqs

Well it seems both QCN (Quake Catcher Network) and Asteroids@home are interested in them. They run Linux and BOINC has been ported to them. Both projects are looking at creating an app to run on them.
Posted by Mark G James at 10:08 PM 1 comment:

There was a bit of a delay in posting as I went away skiing last weekend, Here is the latest news:


BOINC testing
We're on 7.0.33 at the moment. There was a change to the FLOPS (floating point operations per second) estimate for GPU's which can cause issues if you upgrade while you stilll have GPU work. The estimate is now 10 times the CPU FLOPS as a default. Before it was set to the same value as the CPU. If you have existing work it will usually get an "estimated time limit exceeded" error. Its best to finish all GPU work before you upgrade to this version.


GPU Users Group
Terabit Systems donated some 10 Gbit networking gear to Seti@home. A big thank you to them for this equipment and the guys from the GPUUG for organising this. Comms within the server closet should improve quite a bit once this equipment has been installed.


Project news - CPDN
ClimatePrediction have now recreated most of their work units after their problems a fortnight ago. There are quite a few thousand work units available in the regional (EU or Pacific North West) series. They have had a few issues with filling the upload servers and then have to take it off-line for a couple of days while they make room.


Project news - Einstein
They have been updating their OpenCL app to give it improved speed.


Project news - Seti
They had a problem with their version of the server code when they inadvertently removed references to CUDA work. This had the effect of running multiple instances of GPU work units (like 10 or 20) on pre version 7 BOINC clients. Newer BOINC clients worked fine, but those sticking with the old versions had the issue. In the newer clients its referred to as ATI or NVIDIA work. They have since fixed the issue.

In addition to that little problem they also had a 2 day outage due to scheduled electrical work in the Space Sciences Lab. That meant they were off-line for two days. After it came back on-line they weren't giving out GPU work while they worked though the CUDA issue. Its back to its totally maxxed-out 100 Mbit network connection at the moment.
Posted by Mark G James at 6:29 PM No comments:

Today I passed 80 million credits for GPUgrid. Below is my certificate. It seems the last one I took was 30 million back on the 18th of December 2010. On the rankings by RAC (Recent Average Credit) I am now up to position 28 for GPUgrid.
All this can be attributed to two things: 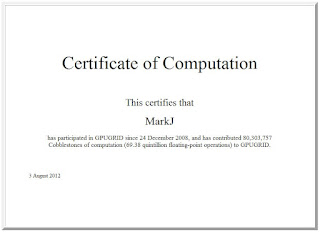 BOINC testing
We got 7.0.33 yesterday. Unfortunately over at Seti it seems all the existing GPU work units fail with "estimated time limit exceeded" errors. There were some changes to the estimated time calculation in this release so its quite likely related. Until this issue is thought out its probably best to stay away from .32 and .33 for the time being.
It you are a Mac user then 7.0.31 became the recommended version. This is because there are a number of installer changes to support OSX 10.8 (Mountain Lion).
GPUUG news
Things have been fairly quiet because the Seti project staff were rather thin on the ground. However there is possibly a new project to consider. We're awaiting the Seti staff to let us know what they'd like to tackle next.
The Transport hard disk fund raiser has a fair way to go yet to finish off and get the additional disk drives the project needs for transporting data from telescopes back to the Space Sciences lab at UCB.
Project news - CPDN
Climate Prediction had problems during the week. It seems their scientists submitting the thousands of new work units have omitted to send some of the files that are used to make up a work unit. When they get to processing the 2nd month they all fail (each work unit represents 1 year).

After a number of complaints of failed work units the project cancelled all of the work units awaiting to be sent. Presumably they all had this problem. So now we're out of work and hoping they will generate new work units that contain all the necessary files rather quickly..