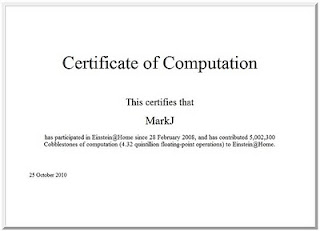 I now have a few spare drives (500Gb WD Caviar Blue). I'll probably remove the old one and install the new one in about a week. I don't want to change the hardware too much in one go so that Windows activation doesn't think its got a new machine.
Posted by Mark G James at 10:38 PM No comments:

Milestones
Nothing reached this week


BOINC testing
We're up to 6.12.4 this week. It fixed a couple of things and introduced another annoying problem. It doesn't look like its ready for release yet, but not too far off it.


Maul returns
As mentioned last week Maul went back to the shop for a CPU upgrade. Its now back and crunching away.


Project news - Climate Prediction
They have space problems. They filled up one of their servers. They have ordered an additional storage system which is due to be installed this coming week.

They also have a bunch of new models being run as a continuation of one of their earlier experiments.


Project news - Seti
Well their BOINC database server was pronounced dead. Another one has been ordered. As a temporary measure they have turned what was the replica database machine into the primary. Hopefully the new server will arrive quickly and things can get back to normal.

With the rearrangements they aren't creating work (although there was some ready to send anyway) and they have placed restrictions on how much work one can get, Network connections are suprisingly quick as they backoff off for 5 minues after each scheduler request.
Posted by Mark G James at 12:55 AM No comments:

Milestones
Not really a milestone but I passed 45 million for all projects.


BOINC testing
We're up to 6.12.2 this morning. I have it installed on 1 machine at the moment and it seems fine so far.

I have been running 6.11.9 for a while on all the machines with some strange behaviour when running GPUgrid TONI_KKi4 tasks. As these are new tasks I think its just the tasks causing the problems and not BOINC. Others are also having problems with these tasks.


Seti donation
Last week they were running a donation drive as it appeared they might need to replace a 2nd server. I made a donation then. However someone else came along with a higher amount early this week. Not to be outdone I decided to match it. Anyway it looks like they have the extra funds if they need them.

The server survived the onslaught with the network maxxed out all week until it was time for this weeks outage. Its back up at the moment and as usual the network it maxxed out again and its hard getting the work. Its allocated to the machine, but because of the overloaded network it simply cannot download.


Temperature
We've had a warm week so most of the machines have been off. Yesterday it cooled down so everything got fired up (yes, even Maul) and they are crunching away with the cache set small in case the warmer weather returns.


Windows updates
Microsoft have been busy plugging security holes. 49Mb per Win7 machine of updates. I've been trying to stagger these so as to not blow my internet download limit and not max-out my network connection.
Posted by Mark G James at 5:07 PM No comments:

Milestones
Nothing reached this week, although I did pass 28 million for GPUgrid.


Project news - Climate Prediction
Well like all the other projects it seems its their turn to run out of disk space. They have managed to fix their initial space problem and got uploads going. I've completed a few Famous climate models but can't report them until they fully resolve the issue.


Project news - Orbit
They have work but some issue with the scheduler has prevented us getting it. Unfortunately Pasquale was out of town for a presentation of the results and wasn't able to fix it remotely.


Project news - Seti
Seems another of their servers is playing up, possibly caused by their air conditioner failure 3 weeks ago. One of the regular volunteers, msattler, started another fund raising drive. We are hoping the money from this one and the previous one will be more than enough to get two servers instead of one.

Meanwhile Seti came up on Saturday (Sydney time) and the downloads have been maxed out for the entire weekend. Getting work is almost impossible at the moment. I managed to report last weeks work and got a few work units but have finished them all off.


BOINC testing
On Friday Kirk started doing crash dumps when running GPUgrid work. I reinstalled the video driver (which hadn't changed in 2 months) and that seemed to get it going. On Saturday Sulu started doing the same. I'm not too sure if its the new work units from GPUgrid (TONI_KKi4) or a bug with BOINC or Windows.

I also uninstalled and reinstalled the video drivers as they too appeared to be an old version. Control panel was once again showing an old version and Windows update keeps offering me an updated video driver, but i'm already running the latest release version from nVidia.
Posted by Mark G James at 9:34 PM No comments:

Milestones
None this week.


BOINC testing
Another couple of releases this week for testing. Current version is 6.11.9 now. I've got it installed on a few machines.


Project news - Einstein
They had a couple of glitches during the week but fixed them quickly. They have a problem with recent ABP work units not validating which they are working on. They aren't sure yet if they will have to redo the work or not.


Project news - GPUgrid
Their turn this week to run out of space on the upload server. They fixed it fairly quickly and we're back in business.


Project news - Orbit
We are just finishing off this weeks run. No new tasks available except resends. All machines except Maul have finished off their work. They are going to take a break for a week as they have a presentation of their results next week.


Project news - Seti
Seti spent all of last week off the air. They are now back online and i've managed to upload and report all my work from 2 weeks ago (along with the other 1 million or so participants). I've managed to get some work out of it since then as well.
Posted by Mark G James at 1:41 PM No comments: