Farm news
As you would have noted from my previous post I got a pair of GTX670 graphics cards. They have been installed and have been running GPUgrid pretty much non-stop since. I haven't had any issues with them, simply swapped out the GTX570's, reinstall drivers and off they go.

I also did a bit of cleaning. The UPS which looks after the file server was given a good clean out (full of dust due to having a fan that runs flat-out all the time). Once I got it all put back together and turned on I get a loud rattling sound from the shelving unit. I tracked it down to the file server which sits above the UPS.

So I take the file server off the shelving unit and pull one side off and have a look around - nothing to see. I put it back together and power it up while its sitting on the floor, all normal so back on the shelving unit. Power it up again and the rattle returns. I take it down again take the other side off and have a poke around, notice the heatsink is covered in dust, give it a quick brush and blow out and then find the fan at the bottom of the case is loose. I tighten its screws up and off we go again, all quiet this time.


GPUUG news
I made a donation to the UPS fund raiser and finished it off. They have now ordered the parts and shipped them to the Seti@home lab.

The hard disk transport package is still going and looking for donors.


Project news - GPUgrid
They have been beta testing their CUDA 4.2 science app. This has now been rolled out to their "normal" users with up to date drivers. This was good timing for my recent GTX670 installation. I don't get any long work units at the moment so it hasn't been applied to all types of work (they have beta, normal and long work queues) but I expect that will be updated soon.
Posted by Mark G James at 9:41 PM No comments:

The farm now has a couple of Nvidia GeForce GTX670 cards. These ones are the Palit Jetstream version. They are factory overclocked with a dual-fan cooling solution and 2Gb of memory.
This is the box they come in, complete with a carry handle on top (why?) 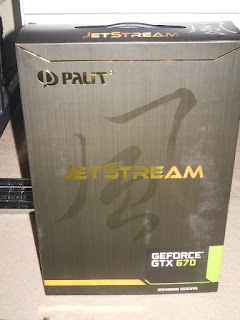 And this is what you get for your money: 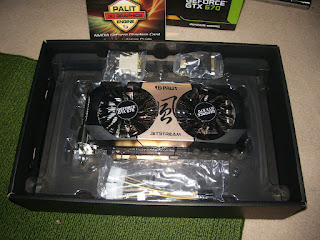 Here is an end view. As you can see its a bit wider than 2 slots. 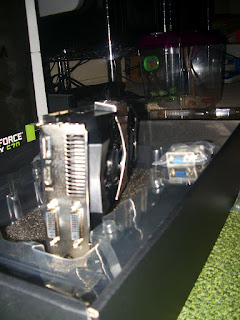 Here is a view from the top. You can see the dual PCIe power connectors towards the middle of the card. 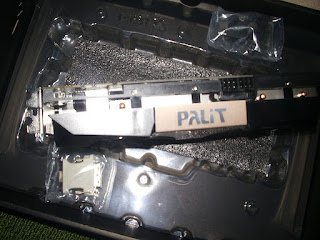 And here we are installed in one of the crunchers. This one is replacing a GTX570 (also a Palit factory overclocked version). 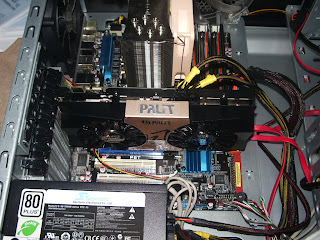 This is what GPU-Z has to say about the card

And here is the Sensors tab while its under load. As you can see its only using 48% GPU load and thats while running a GPUgrid work unit using CUDA 4.2, although to be fair different work unit types give different loads.

As you would have seen from the 2 previous blog posts I spent a bit of time last weekend testing the Adventure. I still can't find a case for it. Its currently packed away again until that gets sorted out. I can't believe nobody makes them over here in Australia, not even a custom built one!


BOINC news
In BOINC land they have been busy switching from using subversion to GIT, so nothing much new development wise.

I have asked for the GPU enumeration to be expanded as BOINC is currently limited to 8 devices but the drivers allow for 64. Dr Anderson has agreed to look into this. We can't stuff that many GPU's into a single machine but some people have managed to put more than 8 in a machine, even I can do that using the Adventure.


Farm news
I have ordered a couple of GTX670 cards which will be used to replace the GTX570's. The 570's will be up on eBay in about a week or so if anybody wants them. Hopefully GPUgrid will be releasing their CUDA 4.2 app to the mainstream fairly soon as it is still in beta testing.

I have been testing the x41x Seti GPU app from Jason G. Its built using CUDA 4.2 and seems to be faster than the older CUDA 3.2 x41g app. It also seems to be more reliable as I haven't seen any -12 errors that pop out from time to time with the older app. This also fits with future GPU upgrades as Kepler-based cards seem to need apps built using CUDA 4.2 to get the expected performance boost from having so many CUDA cores.

Crunching for the other projects continues. I have finished all the Climate Prediction work units that I had on various machines. They now are out of work. In the mean time Einstein is making steady progress, but I am yet to find a Pulsar.


Project news - Seti
In the last week or so Seti had a number of power issues to their building that resulted in one server "Thinman" and a couple of new work stations getting fried. This is why the GPUUG have started a UPS fund raiser.
Posted by Mark G James at 10:38 PM No comments:

Yesterday I used one of the other P6T's to test with. Points to note:

While opening and closing the case many times yesterday the hard disk in the machine died. Just as well I had recently put an SSD in there and backed up the hard disk before starting. Fortunately I have a couple of spare WD Caviar Blue drives I was going to upgrade machines with, but this one had a Caviar Black, well it did until it died yesterday.A quick instal of a new drive and copy the files back and it was up and running again with no work units lost.

Today its Maul's turn. You can see Maul being used with the Adventure and a single GTS450 SP at the bottom of the screen. The power supply is on the bottom right 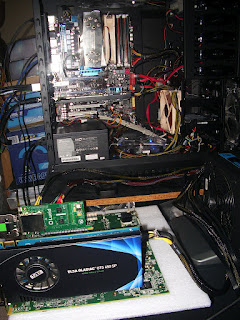 Another shot of the Adventure and power supply sitting beside the P6T. 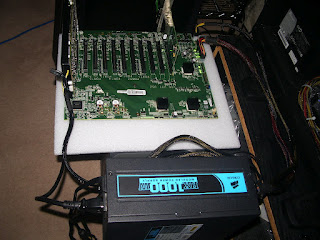 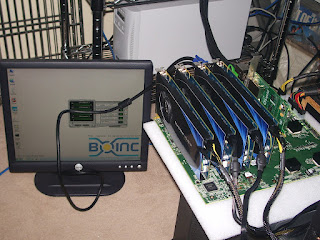 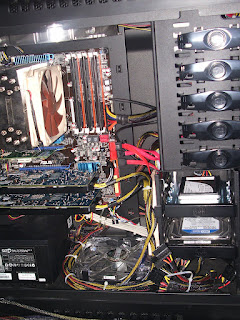 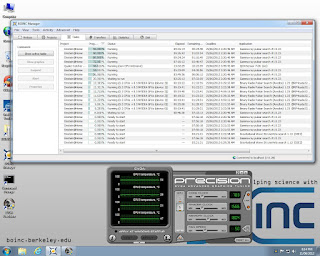 So this leads to an interesting thought, what if I were to get 2 Adventure's and plug both into one of the P6T's. Say 4 cards in each like I have done in this case, that would mean an 8 GPU machine is within possibility.
The GTS450 SP isn't a particularly powerful card. They are probably better running only a single task per GPU, but they only use one slot which means it can have some room either side for better air flow. They have also been superceeded by the newer Kepler-based cards.
Posted by Mark G James at 6:53 PM No comments: 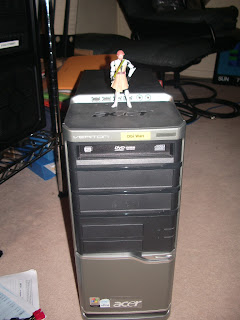 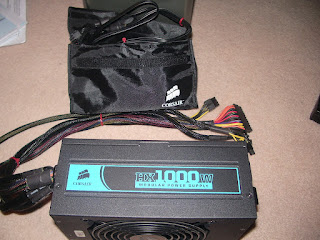 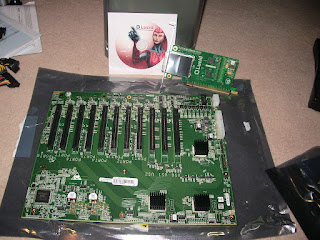 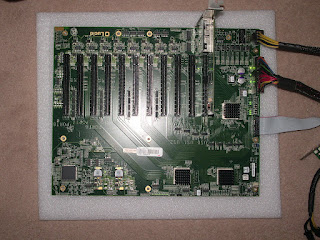 The next step was to connect it to the PC. This bit also worked. However as soon as I added a graphics card to the Adventure the PC wouldn't boot. Probably something to do with the on-board Intel graphics and having an expansion board with a graphics card. Before anyone asks, I have run a couple of different graphics cards using the single PCIe expansion slot in it for a couple of years without any problems. Okay so it won't work with the Acer Veriton.
Posted by Mark G James at 12:46 PM No comments:

Not much to report this week. Crunching continues on the farm...


Project news - Einstein
They've discovered 9 new pulsars. 7 are in the Parkes data and 2 in the Arecibo data.

They are also sending out framed certificates to the users who find these new pulsars. Unfortunately I don't seem to have come across one.


Project news - GPUgrid
As mention last week they are beta testing new apps. It seems CUDA 4.0 will be the minimum version and CUDA 4.2 for the Fermi and Kepler based cards. All of the latest batch of CUDA 4.0 ones failed for me and a number of other users.


Project news - Seti
They were off-line for a few days while they repaired the faulty power cable on campus at UC Berkeley.

They also have a badly thought-out feature where they have limited reporting of work to 64 work units at a time. They introduced this limit as users get an "HTTP Internal Server Error" at some point, believed to be above 1000 work units. This has lead to much frustration as many machines have well over 64 work units to report, mine included. It also created another bug where it tries to resend some of the tasks as "lost tasks" even though they were just reported.
Posted by Mark G James at 9:53 PM No comments: