Seti
Seti did indeed release the long-awaited multi-beam v7 app. This is causing a bit of confusion on what to do to upgrade, if at all.

If you don't use an app_info then you don't need to do anything. The project will simply supply the apps itself. As you can imagine there are a lot of people trying to download them now so a lot of  downloads are backing off.

The CPU and OpenCL apps are not yet available from a 3rd party site. The "stock" apps are your best option for now. I would suggest you finish off any multi-beam work you have, upload and report it. After that rename app_info.xml, restart BOINC and let it get the "stock" apps. Even better if you can delay this for as long as possible due to the load on the download server.


Einstein
They too release their BRP5 work units that are much larger than the BRP4 work units. As there are no optimised apps for Einstein it should simply update itself and start work. I have managed to process a few work units already on my machine with dual GTX660 cards.
Posted by Mark G James at 10:59 PM No comments:

A word of warning
Next week Seti@home should be upgrading to the v7 multi-beam application. Its planned for, but then its been in planning for a long time so don't hold your breath, Wednesday US time. If you run the "stock" applications you don't need to do a thing. If however you run optimised applications you will.

I am in the group that runs optimised apps, so I am setting my machines to No New Tasks now so they finish off what they've got. The Cuda multi-beam x41zc app from Jason is "v7-ready" as they say so I don't need to do anything there, but the CPU and OpenCL ones need updating. Next week once things settle down I will look at downloading the latest apps. The guys from Lunatics are hoping to have a windows installer put together, but it won't happen right away.


Project news - Einstein
In other news Einstein have released their BRP5 (Binary Radio Pulsar v5) app to replace the BRP4. The BRP5 work units take approximately 10 times as long as BRP4 and are GPU only. Unfortunately they aren't running the validator yet as they want to check it when it first runs, that should be early next week.
Posted by Mark G James at 11:17 PM No comments:

Chris asked to see some pictures of the Pi's. This is what they look like. Not a very good way of handling them, which is why I am searching for a suitable case. 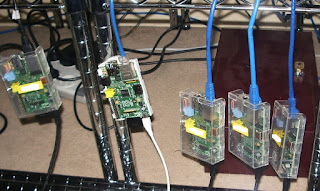 Here is a close up of a few of them, with the top off one case so you can see what they look like.

This is the Simple Pi Rack II that I mentioned previously. Its the best multi-Pi case I have seen so far. There are lots of single Pi cases but hardly any for multiple Pi's. This one has power (via a 7 port USB hub) and a network switch underneath. The link to the message thread over in the Raspberry Pi forums is: http://www.raspberrypi.org/phpBB3/viewtopic.php?f=40&t=41669 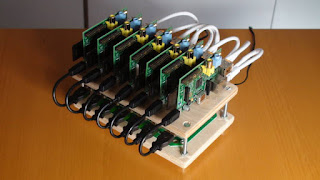 BOINC Pentathlon
As I mentioned last week Asteroids@home were one of the projects being covered in the BOINC Pentathlon. They were the 5th project being run from the 14th to the 19th of May.

Even though I don't qualify as a team I had the farm working away on it. In fact they are still trying to finish off work. They should complete these later tonight even though the pentathlon has finished.


Drobo
I got the Drobo 5N to replace my Drobo FS earlier in the week. I had an initial problem where it decided it didn't like the drives out of the FS, but a firmware upgrade cured that.

Backup times have gone down from a regular 2 hours and 15 minutes on the FS to just 20 minutes on the 5N. Quite an improvement considering its using the same WD Green drives which aren't particularly quick.


Pi
The Raspberry Pi's just keep plodding along. There have been a few updates so I applied them this week to all 5 Pi's.

I am holding off on getting any more Pi's until the Parallella turns up and we can see how it performs, although Parallella is more expensive than a couple of Pi's put together.

I still have not found any decent multi-Pi cases. There was one interesting one where they used some wood and glued HDMI connectors to it. The Pi's stand on their side using the HDMI connector to hold it in place. He had a router underneath the wood and on a 2nd layer had a 7 port USB hub to provide power.
Posted by Mark G James at 11:03 PM 1 comment: 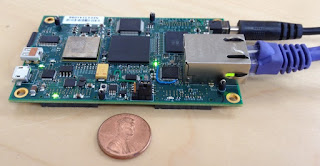 The latest news can be found at: http://www.parallella.org/
Posted by Mark G James at 9:20 PM No comments:

Farm news
Asteroids@home had a problem with their validator. It decided all work uploaded was invalid. The project staff have restarted it and it seems to be behaving now. At one point I had 380+ work units marked as being "validation inconclusive" and then it sends them to another user.

Despite this glitch I just passed the 1 million credits milestone for them about 15 minutes ago. I will now allow a spread of projects rather than concentrating exclusively on Asteroids.

With the cooler weather I am allowing the Intel GPU machines to crunch 24/7 rather than just overnight. My GPUgrid crunchers are also running but only overnight.

Hardware-wise I am looking at replacing the Drobo FS with a Drobo 5N. It is basically an updated FS with the addition of an mSata connector to allow an mSata SSD to be attached, thus making them faster.
Posted by Mark G James at 11:03 PM 3 comments: