I hit the 6 million credits for Seti so below is my certificate. 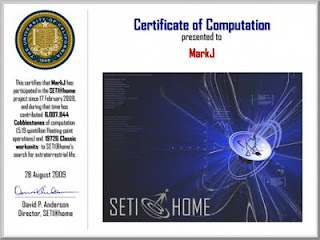 Palit GTX295 grahics cards
The 3 GTX295 cards I ordered arrived. Two have been dropped off at the computer shop to go into the new i7's. The 3rd is going into Kirk. I will be removing the GTX275 that is currently in there. It appears the computer shop forgot to give me the bag of cables for the modular power supply. They used a Y split one to run the existing card, but thats not going to cope with a GTX295.

ATI HD4850 graphics card
The shop have yet to order a power cable for the Corsair modular power supply that is in Maul, so I can't install it either. Apparently its getting ordered next week.

BOINC 6.10.0 testing
The CAL/Brook+ aware version of BOINC came out last week and has been installed on Maul. Its working fine although there are reports of numerous problems with the 64 bit versions. I run the 32 bit version. BOINC 6.10.1 was also released but I haven't tried it.
Posted by Mark G James at 9:19 PM No comments:

Here are a few photos of the innards of Kirk... 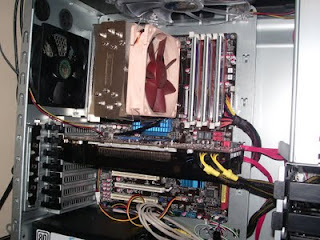 In this shot you can see the end of the graphics card with the PCIe power connectors, the drive bays and on the front of the case another 20cm fan. Down the bottom an extra 14cm fan and at the back the Seasonic power supply. 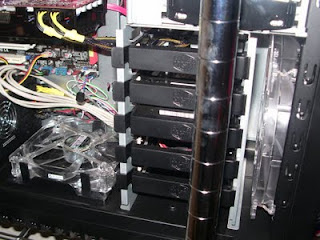 This is another shot showing the fan at the top of the case and you can see the fans on the GTX275. 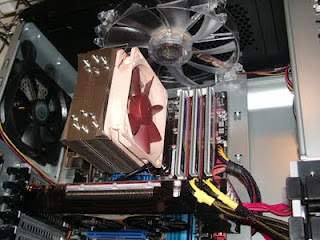 This week in review:

Graphics cards
Got myself an ATI HD4850 video card today. The shop must have seen me coming as it was sitting on the counter when I walked in. I'm not too sure which machine i'll be putting it in yet, probably try it in Maul and see if the ATI drivers will play nice with the Nvidia drivers.

Part of the reason for the ATI graphics card was because BOINC 6.10 was released earlier in the week with ATI support. Now all we need are some science apps that will work properly under BOINC using the ATI cards. There are science apps that use the ATI, they just doesn't run under BOINC.

I have ordered three GTX295 graphics cards to go into the new i7's. If they work out i'll replace the GTX275 thats in Kirk with one as well. These ones are supposed to be the newer single circuit board ones.

Quaddies decommissioned
I have cleaned off two of the quaddies and shut them down. I'm not too sure if I should remove the GTS250 cards, power supply and put the old power supply back in and sell them or just sell them with the GTS250's. Its not urgent to dispose of them as the other i7's won't be available for a couple of weeks.

Future plans
As mentioned before the current plan is to have 4 x i7's running. These will replace the existing i7 and all the quaddies, one of which has already gone to a new home. I had this vague idea that I might get an AMD 6 core machine and put 3 graphics cards in (the x2 variety so it has 6 gpus) and all it does is feed the graphics cards. I need to do a bit more research into this before it happens. The x2 graphics cards (ATI or Nvidia) use a lot of power so this may not be feasable.

Projects back
Einstein have got their file server back online after almost a week. It doesn't appear to have lost any work. Seti are now also pumping out work, so I have finished the Climate prediction work, which was only added because I didn't have any other working projects at the time.
Posted by Mark G James at 10:20 PM No comments:

Are we having fun yet?

The main interest this week was getting Kirk (see previous post). I still need to plug it into the power meter to see how much electricity it uses.

GPUgrid out of space
GPUgrid have been having space problems with their upload server. This means I can't upload any results. Aparently it gets filled up by a log file. So no new work from them and can't upload completed work.

Einstein file server crash
The file server over at Einstein has crashed again (about the 3rd time in as many months). There is a simple message saying it will take a few days before it will be rebuilt. Strangely I can upload some work (ABP1) but not the other work units. I can't report any work though.

Seti out of work
And just to make things interesting Seti can't produce work units fast enough. Funny how you get a fast machine and then can't get work for it.

Given all of the above problems I have attached Kirk to Climate Prediction (their smaller work units take approx 100 hours). That should keep it busy for a while, when it can download the huge files.
Posted by Mark G James at 11:56 PM No comments:

This is the 1st of the i7 machines that are replacing the quaddies. Its name is Kirk.

The case is a CoolerMaster Storm Sniper. Inside is an ASUS P6T motherboard. The CPU is an Intel Core i7 920 with 3Gb of DDR3 RAM. This one has a Palit GTX275 graphics card installed. 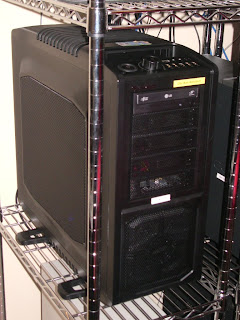 Another photo showing the controls and connectors on the top. 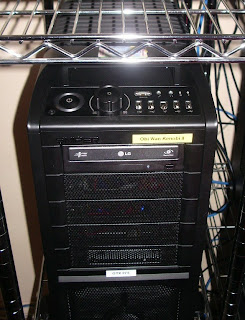 In this shot you can see how big it is compared to the quad-core machines it is replacing (Qui Gon Jinn). 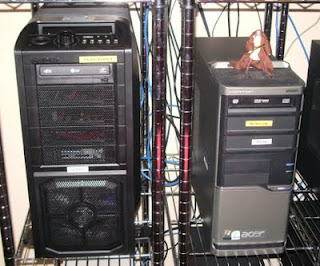 Another shot showing the top panel. The twist-knob is a manual fan speed control. The push-button switch in the centre of the knob turns the fan LED's on and off. 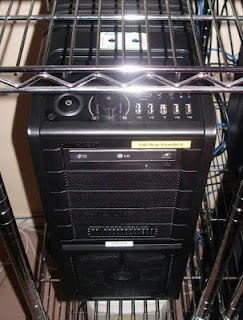 And a front-on shot of it. As you can see lots of grills so plenty of airflow. It has a 14cm fan in the bottom blowing cool air up into the rest of the case. The power supply (a Seasonic 700w) is mounted at the bottom. 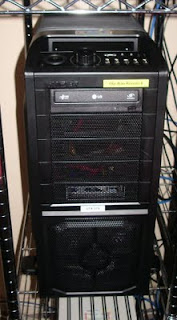 Not much to report this week as I was away skiing. While I was away I had two of the quaddies turned off and left the other two plus the i7 on.

Einstein cuda app
This weekend I have been testing the first beta of the Einstein cuda app. While its a 1st beta it seems to run fine on one of the quaddies. The drawback is that it uses a whole cpu to feed the gpu. I completed a 1st test run on Luke. At the time I write this I have a 2nd test running on Maul.

GPUgrid and 190.38 woes
It appears almost all the complaints about failed work on GPUgrid when using the nVidia 190.38 drivers are all GTX260 cards. It doesn't seem to matter if they have 192 or 216 shaders. I have two in Maul and can't use it for GPUgrid any more. Any driver version above 182.50 fails.
Posted by Mark G James at 9:11 PM No comments:

Its with a bit of sadeness this week. Yoda was sold and has gone off to a new home. The first of the i7's that are replacements for the quaddies has yet to be built by the shop, but they promise that it will be ready by the end of next week.

I'm off for a weeks skiing so the "farm" will be switched off, except for Maul.

Overstretched
Maul overstretched itself last week by requesting too much work. This is caused by the ReSchedule tool swapping work to the cpu, so BOINC then thinks the gpu doesn't have enough and request more. The solution is to set all the projects to No new work (NNW) so that it can finish off what its got. Its been in this mode for the last 3 days.

GPUgrid app
The GPUgrid project (which does medical research) released a new cuda 2.2 application at the end of the week. I've already had one machine lock up and had to abort the work unit in question. Maul, who would be ideal for these work units has been in NNW mode for the last 3 days so it hasn't picked up any new work or the updated application.

Seti Donation
After an on-going discussion over on the Seti message boards about the MySql log files being a point of disk contention we came up with the idea of using Solid State Disks (SSD's). These are of course fast and expensive when compared with a traditional hard disk. I made the offer of getting a couple of them for the project (Intel X25-M). I ordered 2 from a US web site with them shipping directly to the Seti@home project. They are due to be delivered on the 6th of August. Hopefully the project can put them to good use.
Posted by Mark G James at 8:57 PM No comments: