Its christmas here in Sydney and all is quiet. Well Maul was the only machine running.


Ahh the memories
As mentioned in the previous post I was trying to finalise the memory upgrades. It turns out that 2 of the 5 sets are faulty. One set gave errors when used and I swapped it out in favor of another set. Another set reported 4Gb at boot-up instead of the 6Gb that I paid for.

Both sets were returned to the computer shop early in the week for replacement under warranty. While I was there I ordered another 2 sets, so a couple of the machines (if the memory works) will have 12Gb.


Intel i9
I was reading up on the Intel i9 processor which is slated for release in the 1st quarter of 2010. Its actually an i7-980x. Its a hex-core version of the i7 with hyper threading. Supposedly should be available as a new chip and a BIOS upgrade required to recognise it for my Asus P6T's.


Seti power outage
The Seti project is having a couple of power outages. One on the 27th of December and another on the 3rd of January. Apparently there is some fairly major electrical work going on "up the hill" where the Space Sciences Lab is located at UC Berkeley.

Due to this power outage I have been running down the Seti work and will concentrate on a few other projects for a week or two. For the machines that have 6Gb memory I have started running some climate prediction work (it uses a fair bit of memory).
Posted by Mark G James at 9:42 PM No comments:

Windows 7 x64
I updated the remaining P6T's with Windows XP to Windows 7 (64 bit). They have now all been done.

There are only two 64 bit science apps, the rest are 32 bit. They are the Seti multi-beam and the Milkyway GPU app (version 20b). The good news is that they are faster than their 32 bit versions, so there is a bit of a speed improvement.


BIOS updates
After the issues getting the RAM working in Maul I downloaded the latest BIOS for the P6T's and then set about updating all of them. I found of the 5 P6T's they had 4 different versions. As expected Maul had the oldest.

I had some initial problems trying to get the program that flashes the BIOS to work, but it turns out its not needed anyway. There is a built-in utility in the BIOS to flash itself. I burned the BIOS image to a CD and updated all 5 of them using it.


Router died
The router continued playing up so I have thrown it in the bin and got the new one going. They are both the same make/model so it wasn't too hard an exercise, apart from having to find a machine where I could specify the IP address in order to talk to the router in the 1st instance. Once its been setup the router assigns its own IP addresses.


Windows 7 drivers
While I was updating things I downloaded a few of the drivers specific to the P6T and installed them, so instead of using the generic Windows 7 versions they have the manufacturer specific drivers. It doesn't make much difference but it might make them a little more stable.


What left?
The only remaining task for this year is the memory upgrades, now they all have a 64 bit operating system. This requires a bit of manual labour, pulling machines off the rack (and they aren't light weight). Two out of 5 have already been done.
Posted by Mark G James at 5:42 PM No comments:

BOINC versions
Another new version out this week, but I haven't installed it yet. There are a couple of complaints about the amount of CPU time its taking and of cuda tasks being stalled.


Christmas donation drives
Both Seti and GPUgrid have donation drives running. If people would like to donate please use the links below. As mentioned in last weeks post, I made a donation to Seti. In fact to keep things fair I even did one to GPUgrid.


Maul upgraded to Windows 7
Well I decided to be brave and upgraded Maul from Windows XP to Windows 7. The software side of things installed fine without any issue. I was expecting the fact that it had dual GTX260's might cause issues, but they were both found by the nvidia drivers and seem to work fine.

I then went to upgrade the memory and the 1st packet (3 x 2Gb modules) wouldn't work, nor the 2nd. The machine refuses to even POST with the 2Gb modules installed. I put the 1Gb memory modules back in, had to reset the BIOS and its back off and running. Its a standard ASUS P6T so they should work unless both sets are faulty. Possibly its got an older BIOS as it was the 1st of the P6T's that I got.


Weather
Yes its been warm most of the week, with one day being hot. So the all the machines were powered off for that day. Usually if its warm i'll only run one or two machines because of the heat they produce. This doesn't do too much for my crunching scores, with my RAC (Recent Average Credit) falling from about 60k per day to around 40k at the moment.

Even the router has been locking up on the warm days so its probably on its last legs. I bought another one today, so if it fails I can just swap it out.
Posted by Mark G James at 5:20 PM No comments: 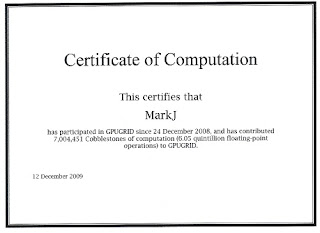 While many people are happy to do crunching for Seti only a small percentage (I think its about half a percent) actually donate to the project. Anyway its out with the plastic to help them out.
Posted by Mark G James at 6:23 PM No comments:

Another warm week here, so half the machines remain dormant.

NEZ forced resignation
This guy was the top ranking user at Seti@home. Apparently he was the IT director for Higley Unified School District. Its alleged that he was running BOINC on their computers without their permission. Seti@home project scientist Dr Eric Korpela has posted an FAQ and comments:


Nvidia drivers
They have released the 195.62 drivers which support CUDA 3.0. Unfortunately the CUDA run-time and the FFT libraries are still in beta. I installed the drivers on Kirk and ran some Seti work and then some GPUgrid work using CUDA 2.3 libraries. This worked fine on Windows XP so I have now installed it on Spock. Its running a GPUgrid work unit at the moment on Windows 7 64 bit.


Windows 7 upgrades
I haven't updated the other machines yet as I am concerned about the multi-GPU issues with the Windows 7 drivers. From what most people have been saying it requires the use of dummy plugs on the back of the graphics card, otherwise windows won't recognise the 2nd GPU. I don't have any dummy plugs.


Chekov crashes
As mentioned last week Chekov has crashes at startup. I think this is being caused by the beta ATI drivers which worked fine in 32 bit, but after upgrading to Win 7 64 bit didn't. I will be putting the latest release catalyst drivers on it this week.
Posted by Mark G James at 11:14 PM No comments: