Farm status
CPU only
Two running Rosetta work.
Intel GPUs
Four running Rosetta work.
Nvidia GPUs
Off
Raspberry Pis
Three running Rosetta and ten running Einstein BRP4 work.
For news on the Raspberry Pis see Marks Rpi Cluster
Current farm
The farm currently consists of:
2 x Ryzen 3900X machines (the CPU only)
6 x i7-8700 machines (the Intel GPUs)
4 x Ryzen 3600 machines with GTX 1660 Ti graphics (the Nvidia GPUs)
As you can see from the farm status its concentrating on Rosetta work. The new Ryzen 3900X is building up its RAC (Recent Average Credit). The older one seems to have topped out at 31,000 credits for Rosetta so that is where I would expect the newer one to  settle, its on 19,000 at the moment.
Other news
I made an inquiry to Ampere Computing regarding an Altra-based machine. They make ARM v8.2 multi-core CPUs with various clock speeds. I haven't received an answer.
Ampere Computing have two models of fully assembled machines. The single CPU (80 cores) machine is a 2U rack mount with a Gigabyte motherboard, its called Mt Snow. There is also a dual CPU (160 cores) in a 2U rack mount. Its called Mt Jade. Both support PCIe gen 4 and use standard DDR4-3200 memory.
There is also the Marvell ThunderX3 chip which supports more cores but isn't quite available yet. It too is an ARM v8 multi-core CPU with hyper-threading.
Posted by Mark G James at 5:21 PM No comments:

Some photos from the recent Ryzen 3900X build. This is the second one to join the farm.
Here it is partially assembled with the motherboard in the case. This is a Meshify C case which takes an ATX motherboard and not much else. There are a couple of 3.5" hard drive bays in the bottom (enclosed) section at the front, however the cabling usually gets stuffed in there. 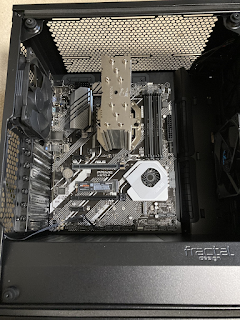 The view from the front of the case with the mesh removed. 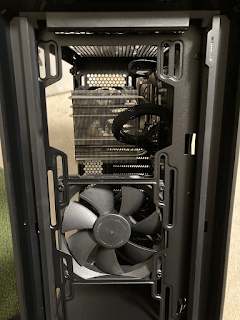 With all the bits in there. The short card near the bottom is a 2.5GbE NIC. The larger card above it is a GT 710 graphics card. 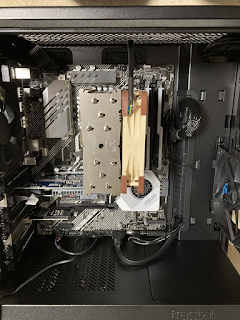 And powered up so you can see the glow from the RGB memory. I don't know about the rest of you but I find it rather annoying. I prefer to use memory without the bling, except it wasn't available at the time. 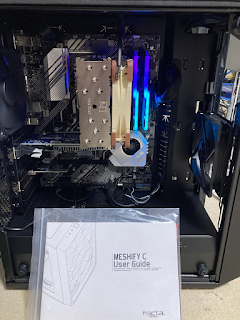 Farm status
CPU only
Running Rosetta work
Intel GPUs
Running Rosetta work
Nvidia GPUs
Off. Had two running Rosetta during the week
Raspberry Pis
Three running Rosetta. Ten running Einstein work.
For news on the Raspberry Pis see Marks Rpi Cluster
Other news
The farm has been running Rosetta flat out as they continue their Covid-19 research. When it rains I have to shut the window and that means the heat builds up so I need to reduce the number of machines running which is why the Nvidia GPU machines are off quite often. The weather forecast for next week has rain for the whole week, heavy at times.
With the electricians coming next week I need to clear some space around power and network points around the house so haven't had a chance to look at the Ryzen 3900X build or the storage server. I had to adjust one of the shelving racks that sits above one of the power and network points which means moving computers around. They will also need access to the roof space so that means clearing access, one of which has a pile of (empty) suitcases in the way.
I will need to power everything down so all of the machines have to finish off any work they have. With Rosetta that can take up to 16 hours.
ARM based server
One of the ideas I am looking at is an ARM based server for compute purposes now that ARM is getting more support from developers. Both Ampere Computing and Marvell have new multi-core chips. The Ampere Altra boasts 80 cores and the Marvell Thunder X3 has 96 cores/384 threads. These are aimed at the data center market at the moment although usually its a matter of time before they make a workstation version.
Its a bit early (and expensive) to get one at the moment but something to keep an eye on developments. Both of these support DDR4-3200 memory, have disk/SSD support and PCIe expansion. The number one position in the Top500 Supercomputer list as of June 2020 is the Fujitsu Fugaku which is ARM based.
Posted by Mark G James at 8:31 AM No comments:

Farm status
CPU only
Running Rosetta work
Intel GPUs
Running Rosetta work
Nvidia GPUs
Two running Rosetta work
Raspberry Pis
Three running Rosetta. Ten running Einstein work.
For news on the Raspberry Pis see Marks Rpi Cluster
Pauses
We had a couple of pauses in computing since my last update. One due to the weather and the other due to electrical work.
The electricians need to replace network cabling in the walls/roof as its stopped working. The network cable tester thinks about half the wires are broken or disconnected and that was after replacing the sockets. The original cabling was done about 20 years ago and was Cat 5e so it will get updated to Cat 6a in the process.
Repairs and Outstanding work
I had to replace a case fan in one of the Intel GPU machines as it was making a fair bit of noise. The machine next to it is also loud so I need to replace it as well. Its a fairly quick fix but I need to get it to finish off its current work and that takes up to 16 hours.
The second Ryzen 3900X build is still sitting in boxes waiting to be assembled. Given its the weekend I might get time to look at it today, depending on family commitments.
The replacement server motherboard is still waiting to be installed. Its on the bottom of my list at the moment as the existing server is still working even with the memory in the wrong slots.
Posted by Mark G James at 8:40 AM 1 comment: