Here is the fan modification that I did to one of the Raspberry Pi's.

Here's the fan and silencer. It comes with 4 self-tapping screws 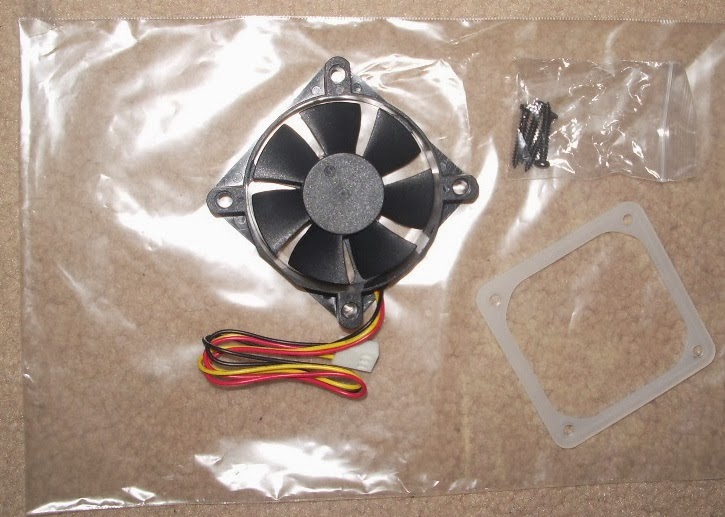 Tools. Yes you'll need something to put a hole through the top of the case. I bought a 60mm drill bit normally used for locksmiths to drill into doors. As you can see it works on plastic Raspberry Pi cases too.

The center drill bit is designed to pull the blue part of the bit into timber, however it got stuck before the blue part had even reached the plastic. I had to drill out the center hole with a normal drill bit so that the blue part can touch the top of the case. Here is the fan mounted on the top of the case. That is a resistor cable with the blue plug. It came with some 12 volt fans. I was thinking of using them to reduce the fan speed (the fan is rated at 4000 RPM) however they don't work at 5 volts. 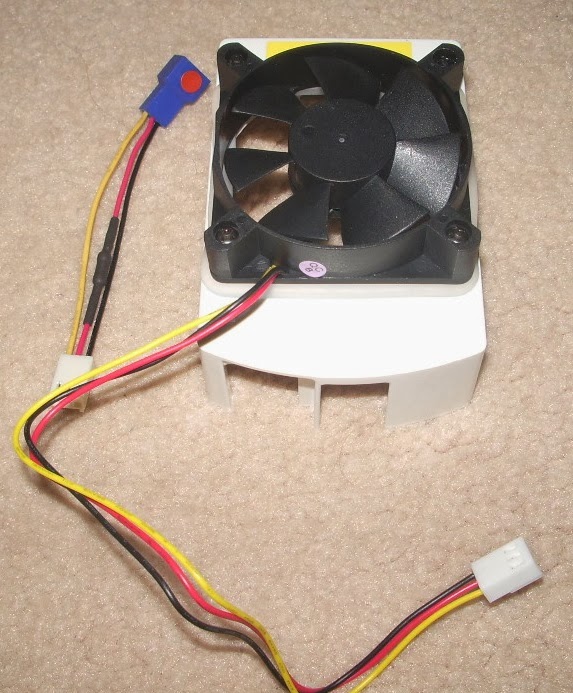 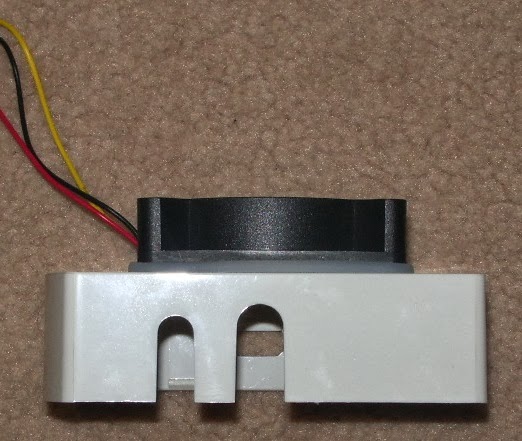 A shot from inside the top of the case. 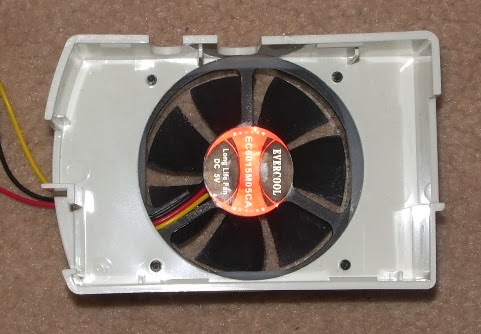 These are the USB to molex fan header cables that I got off eBay. 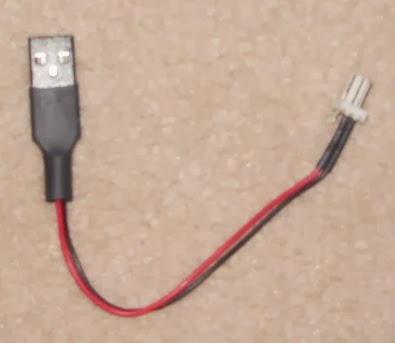 And here we are fully assembled 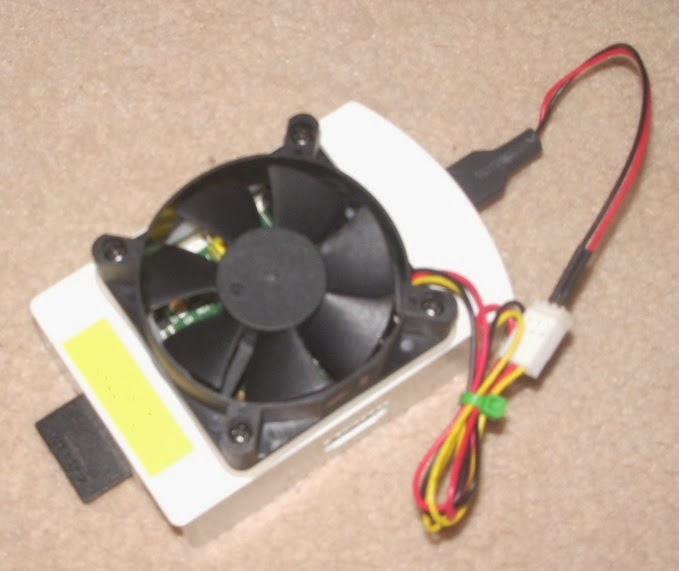 Another shot at a different angle of the completed modification 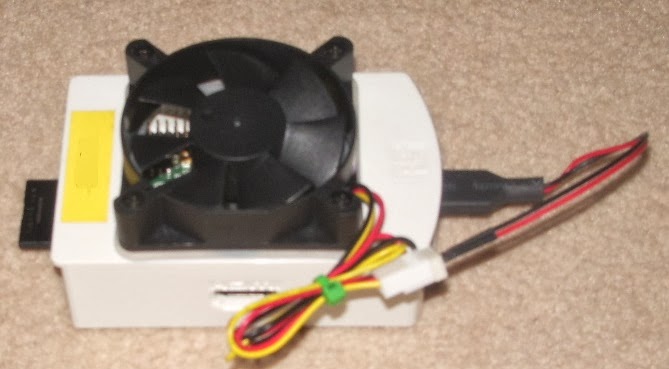 The fan is blowing air into the case. This was because if the fan were turned upside down it doesn't mount properly. The holes on this side of the fan are countersunk. I think it provides more airflow over the 3 main heat producing components on the Pi this way, rather than trying to suck the air out of the case.

The rubber fan silencer is useful. The fan itself isn't exactly 60mm so there is a gap between the hole in the top of the case and the fan if mounted directly. It also cuts out the vibration which was the reason why I got it.

I did buy a couple of chrome fan grills but the screws aren't long enough to hold the fan on as well as the grill. If I can find some longer self-tapping screws I will try and mount the grill later.

Running the fan off the Pi's USB port means the fan doesn't run at full speed which makes it quieter and should help it last a bit longer. Just make sure your power supply can provide extra power to the Pi.
Posted by Mark G James at 9:23 AM No comments:

Farm news
Again another hot week and then just in time for the weekend showers which cooled things off a bit. I have, for the weekend at least, managed to get the GPUgrid crunchers running and had a few of the Intel GPU machines running too.


BOINC testing
7.2.39 was released to the public. Not much change since .33 so I haven't bothered updating machines, although I did have it on a couple for testing.

We're now into another alpha-test cycle with 7.3.2 which is mainly upgraded support libraries such as wxWidgets as they have moved on. There should also be some amendments in the notice handling.

Unfortunately it won't help the Raspberry Pi's as the Debian Wheezy repositories are still stuck at 7.0.27. I am not sure how they get newer versions into the repos as its been stuck at that version for the last year or so.
Posted by Mark G James at 9:26 PM No comments:

Farm news
Another hot week. I managed to get about 2 days of crunching going but we're all off at the moment. I don't see much chance of things improving for the next month or so.


Project news - Einstein
They've run out of the Arecibo data so the only things getting any of the BRP4 work now are the low-end devices such as the Raspberry Pi. There was an earthquake at Arecibo in January and they seem to closed for repairs at the moment. Arecibo also has funding issues. The BRP4G work units have run out as they were really 8 BRP4 work units bundled together. Einstein have other searches to keep the CPU's and GPU's busy though.
Posted by Mark G James at 3:01 PM No comments:

Farm news
Nothing much happening again this week due to the heat. Its turned cool today so I have taken the opportunity to get the GPUgrid crunchers plus a few of the Intel GPU machines going for a day or two until the heat returns.

I started on the Raspberry Pi fan and have taken some photos which I will put up as a separate blog post. The Pi developers have come up with a FFT library that runs on the GPU and promises speed improvements of 10 times.

Not that I need another machine  but I rescued an old Dell Dimension 4600 that was getting thrown out in a council clean-up this week. Apart from being full of dust it works fine. It had an XP Home license sticker so I have put an 80Gb hard disk into it and clean installed XP Home on it. Its only a Pentium 4 with 512Mb of memory. Microsoft is stopping support for XP on the 8th of April.


BOINC testing
We got 7.2.39 this week. They have given up on the sub-second CPU throttling after realising their "wrapper" can only work in 1 second intervals.

They added reporting to project servers every hour (in .38 I think) which I find rather annoying. Hopefully some of the projects will complain about the extra load it places on their servers.


Project news - Seti
They have released an Intel GPU app for multi-beam work units. I need to download the app and put it into my app_info when I get a chance.
Posted by Mark G James at 11:32 PM No comments: