The farm finished off all its work now. All the machines have been powered down. I am off on a vacation soon. I will be away for a few weeks.

This week GPUgrid hit the 39 million mark. The GTX570's can really chew through their work units.

Seti has still been plagued by network issues, so the farm has been concentrating on Einstein  and GPUgrid work. Unfortunately they are so popular and can't handle the number of users they have via a 100Mbit network connection. They really need a faster connection to the outside world, but unless somebody with deep pockets is willing to come up with the cash it isn't likely to happen.
Posted by Mark G James at 9:39 PM No comments:

Milestones
Well its been a fortnight since the last post. I managed to pass 38 million for GPUgrid and 8 million for Einstein.


BOINC testing
We have 6.12.33 to test at the moment. Not much different to the previous couple of versions other than bug fixes. I have put it on 3 machines at the moment, the others haven't been updated from the release version (6.12.26) yet.


Farm news
There is a new optimized GPU app available for Seti (known as x38g), which is somewhat faster than the previous optimized GPU app (x32f). It caters for the newer V7 format work units which will be introduced later this year, as well as handling the current V6 format. It requires cuda 3.2 capable drivers to be installed, which I already had. I have it running on the 2 machines that do Seti work.

I am running the cache down on all of the machines as I will be taking a trip soon. The farm will be off while I am away.


Project news - GPUgrid
They brought out a revised app known as 6.14 for cuda 3.1 capable machines. Unfortunately they set the task priority to Above Normal so the whole machine is sluggish. Their main developer has gone off on a 10 day (work) trip to the US, so we have to put up with it for the next week or two.


Project news - Seti
They have been having network congestion issues for the last week or so. Now they are starting to run low on the data to send out due to having a whole bunch of short work units. They can't get their raw data off their backup and split it into work units fast enough.

Last week they did their Green Bank observing and have lots of data to process. It will probably require a new application as their data format is slightly different to what they get from Arecibo. We might get to process this data towards the end of this year depending on how fast they can come up with a new science application.
Posted by Mark G James at 10:57 PM No comments:

Milestones
As you can see from the certificate below I managed to pass 35 million for GPUgrid. 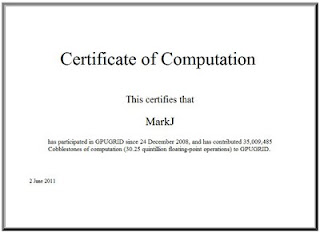 BOINC testing
We got 6.12.28 during the week. There us a bug fix where 6.12.27 was corrupting the output files for all work units.

There is also a feature when setting a project to No New Tasks it will report on every upload (rather than last upload). I queried this as it will add overhead to the scheduling servers, but Dr Anderson thinks its minimal impact.


Farm news
Nothing much to report for the farm this week. I have been keeping a couple of the GTX570 machines busy all week, hence the GPUgrid milestone.

Still no work from CPDN at the moment.


Project news - Seti
Their network connection has been maxxed out for the whole week. Downloads keep going into back-off mode and uploads too. They have a 100Mbit link but with 100,000+ computers all trying to connect at the same time. Their problem is being compounded by the fact they are giving out short work units that get processed quickly, which means they are being returned faster and then more work is requested.

For the time being I have set my couple of machines that do Seti work to concentrate on other projects.
Posted by Mark G James at 2:27 PM No comments: