Farm news
Greetings from Tokyo. The farm is off because I am overseas.


BOINC testing
We got an almost final version of the 6.13 client (6.13.10) which is expected to become the new version 7 client once testing completes. It sounds like its now stable enough to try this version.


iPad development
Well the developer has given up. He doesn't understand how to install BOINC on a Mac and use the iPad app that he managed to get compiled. I will try and post the Xcode project that he came up with in case its of use to another developer. Its not complete (he didn't do the GUI or convert the code to Objective C) and its fairly big at 144Mb. Its based on the Mac 6.12.36 client.

Project news - CPDN
The project was hacked and some user account details were compromised. The administrators shut the project down and have been investigating the extent of the problem. The project is now mostly running again but trickles aren't at the moment.

They have emailed the effected users to let them know. My understanding is that they were mostly moderators that had their account details compromised.
Posted by Mark G James at 5:08 PM No comments:

Farm news
Well the farm has been running just a single machine for the last week. I have now shut it down until I return. As expected there hasn't been too much progress from a single machine. This single machine has 7 CPDN tasks on hand, 3 of which have completed but can't report. One of incomplete work units is a full-res ocean work unit that takes 550 hours and is about half done.


Project news - CPDN
They were attacked and the project has been down for the last few days. No further news yet as to what happened.


Project new - Seti
They have upgraded the memory in a router which should have resolved the randon connection issues. Apparently it didn't have enough memory to cope with all the connections going at once. Hopefully it might also improve network throughput.
Posted by Mark G James at 10:10 PM No comments:


BOINC testing
We got 6.12.41 during the week. It fixes a couple of memory leaks.

I suggested a change to the way file transfer back-offs are handled. Dr Anderson has amended the process stightly and added these changes to the 6.13 client (which I am staying away from). I will ask if we can get it put into the 6.12 client as well.


Farm news
Well as you can tell the farm is still going, although in a reduced capacity at the moment as its starting to warm up in Sydney. The trip to Japan has been postponed for another week.


Project news - CPDN
Work has been rather sporadic as they wait for work units to be completed before generating more. They have a bunch of hadam3p (regional) work units available to download at the moment.

They are having a problem with the permissions on some of the files so they get stuck in downloading. Until somebody from the project can fix that we can't get the last 2 files that make up a work unit.


Project news - Seti
They are having their fall funding drive. I have made a donation to help them keep running.

We have been having some discussions around how to better use the limited network bandwidth over there. Hopefully some of the suggestions can be implemented. None of them involve hardware, just changes to data formats, compression of requests, reduced information in requests, etc.
Posted by Mark G James at 10:01 AM No comments:


BOINC testing
We got 6.12.39 this week to give a run. Its pretty much the same as .34 but has a few changes around the virtual box handling and some Mac stuff.

I have made a request on the mailing list to amend the way BOINC handles back-off on file transfers. My idea is to back-off on a per URL basis rather than the whole project. This should alleviate the problem we had last week where Einstein GPU work had download issues and we couldn't get any CPU work which was available from other servers. Dr Anderson has said he'll look into changing the way it works.


Farm news
Things have been chugging away during the week. I have purchased a couple more shelving units. The file server has moved into a rack since taking last weeks photos.

The place where I am working want to send me to Japan for 4-6 weeks as early as next week. That means the farm will be off while I am away. It also means I won't be updating this blog for a while.

The 3 Climate Prediction full-res ocean work units finished yesterday and have been uploaded. Just as well seeing as they take 550 hours and farm will be off.


iPad development
The developer isn't sure how to test it, so I have repeated what I told him before, which was to install BOINC on another machine and use the iPad BOINC manager that he has managed to compile to talk to it. It gets very frustrating when you have to keep repeating instructions, all of this by email. Anyway we will see if he can get it to work.
Posted by Mark G James at 3:50 PM 1 comment:

A pinch and a punch for the first of the month.


Milestones
Nothing new yet, but will probably get to 45 million for GPUgrid tomorrow.


BOINC testing
Well I didn't do any this week. 6.13.6 came out today, but I still don't think its stable yet.


Farm news
They say a change is as good as a holiday. So I have reorganised things. Instead of having the i7's stacked on top of each other I have given them their own shelving unit. This should hopefully reduce the heat a bit. I have also raised them off the floor some more to allow for power boards, which I also replaced.

These CM Storm Sniper cases have a fan in the base blowing air up from the bottom and onto the graphics card which is another reason why I moved them up a bit (less dust/hair from the carpet getting sucked up). 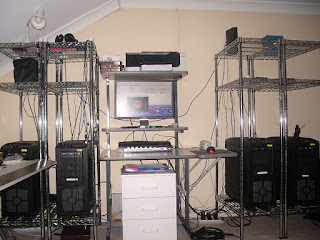 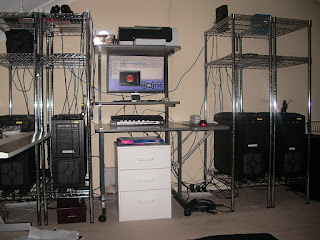 As you can see there are 2 machines on the left and 3 on the right. The last one doesn't have a shelving unit at the moment and hasn't been plugged in.

The cabling isn't tied off. I need to get a couple more lan cables and then I can use cable ties to make the cabling a bit more secure and neat. While I do have enough cables I use color coded ones for some parts of the network.

You can't see it but to the right (and in the middle of the room) is the file server with its UPS and one of the quaddies. I need to sort out some shelving units for them too. The UPS was full of dust so gave it a bit of a clean. The dust filters on the file server were also clogged up so I gave them a clean as well. I was going to wash them but couldn't work out how to get them off.

You can see the graphics from a Climate Prediction work unit on the screen. Its one of those full-res ocean work units that take 550 hours. The figurine on the right is Darth Maul, so you can guess which machine he is standing on.


Project news - Einstein
This weekend they are having download problems with the GPU work. Its been fine most of the week, but this weekend downloads have been backing-off and when they do get through they are very slow. Its probably because of the number of users all wanting GPU work.
Posted by Mark G James at 12:12 AM No comments: