Its all all about the Pi's again this week.

I have ordered three more Pi3's which will be used to replace the remaining Pi2 and the two Parallella's that are still crunching. That will bring the Pi part of the cluster up to 7 and should make maintenance a little easier with only 1 flavour of Linux to deal with.

I have joined a team called Raspberry Pi over at the Einstein project under the handle PorkyPies.


Beowulf Cluster
I used the now redundant Pi2's for medical, I mean computer, experiments. I was trying to follow a tutorial about setting up a Pi cluster. A true Beowulf cluster. Not what I am running at the moment which is called a CoW (Cluster of Workstations). In a Beowulf cluster you use off the shelf hardware and have a head or master node and it issues tasks to the compute nodes to run and typically uses MPI (Message Passing Interface) to communicate.

The tutorial I was using was this one: Build-a-compact-4-node-raspberry-pi-cluster

There are other tutorials but most seem dated and were for other flavours of Linux so I felt this one was closer to what I wanted to try. There are a few things in there that I didn't want to do like using a USB hub to power it (I have plenty of power adapters) so I skipped that bit and they also added a Blinkstick which I wasn't going to do either. I didn't need a fancy case either, just two Pi2's should be enough to try it out.

Following the tutorial using the March 2016 release of Jessie lite was a failure. It seems the rpcbind service fails to start up. Having manually worked around that I got the ssh keys setup and mpich installed and while I could run a task on the head node I couldn't get it to use the compute node.

I had a bit more success using Stretch which at least seems to have fixed rpcbind not starting up, but still can't get it to run tasks on the compute node. At this point I am stuck.
Posted by Mark G James at 3:27 PM 1 comment:

The heatsinks turned up. They can be ordered directly from Enzotech (www.enzotechnology.com) if you can't source them locally. These are a set of 8 called the BMR-C1 designed for RAM chips on graphics cards. But that means you can do 8 Pi's with the one set :-) 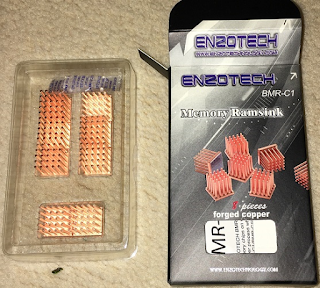 They are 14x14x14mm with the pins/fins arranged in a 5x5 grid. They are made from forged copper which is a better heat conductor than aluminium and they come with thermal tape applied to the base and ready to stick onto the Raspberry Pi SoC.
They also make lots of other sizes in case you want to cool other chips such as the USB chip.
I have now replaced the B+ with one of the Pi2's. The remaining Pi2's have been replaced with Pi3's. I still need to cut holes in the tops of the cases and mount the 40mm fans but that can wait until the weekend. The desk fan can keep them cool for the moment.
Given the speed advantage the Pi3 now has over the Parallella I am thinking of swapping out the Parallella's as well. Unfortunately the Epiphany chip on the Parallella sits idle.
The ARM part of the farm currently consists of:
1 x Pi2
4 x Pi3
2 x Parallella
If anyone wants the old ones I am happy to give them away but you'll need to pay for postage. I still have some of the original B's looking for a new home too.
Posted by Mark G James at 11:58 PM 2 comments:

The case is the "official" one as mentioned in my previous post.
The fan is a Noctua NF-A4x10-5v (40mm x 10mm - 5 volts). Noise-wise they are rated at 17dB. In fact its so quiet that you have to look at it to see if its actually running. They come with a 6 year warranty. I've been using them in my PC's for years and have not had one fail yet, but this is the first time I have used a 40mm one.
The fan kit has 4 mounting screws, a 2 to 3 pin adaptor, an extension cable, an Omni-join connector set and the rubber anti-vibration mounts. The fan has a 3 pin plug. 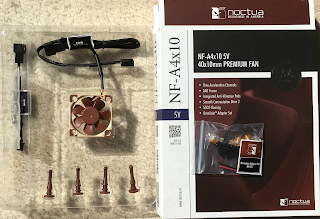 The first part is to mark out the centre of the top and drill the hole for the fan. As you can see I have a fully equipped workshop (an old vice and the 38mm drill bit). 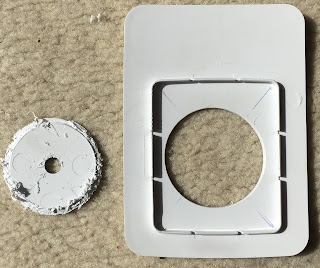 And here I've drilled the holes for the screws and put it on. Since then I've reversed the fan direction as it seems to cool better. I was going to suck the air out of the case but find blowing it into the case seems to work better. 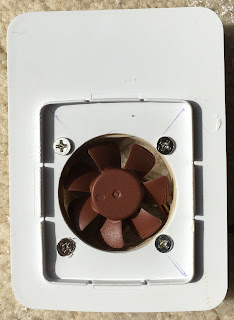 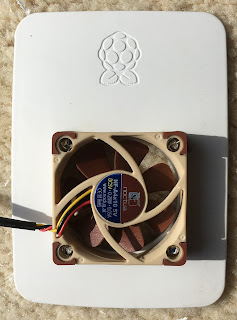 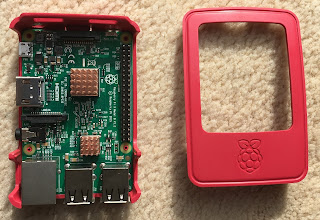 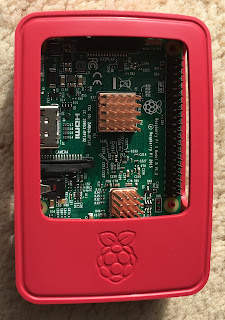 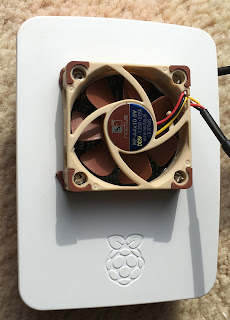 And here it is running I had a USB to 3 pin fan header which I used at first. After finding out the correct GPIO pins I used the supplied 2 to 3 pin adaptor and simply plugged the 2 pin end onto the GPIO. Now with the Pi3 running flat out its coming in with temps around 55-56 degrees C (room temp is 27 degrees).

To find out how hot it is; in a terminal window issue the command vcgencmd measure_temp

Parallellas and Pis
Running Einstein work around the clock

The Einstein O1 search is running on the faster machines. They expect the first run to take 100 days to complete. After that they will do other searches using the same data.


Pi case mods
The official Raspberry Pi cases arrived a week ahead of schedule. While the Pi3 is the same size as the Pi2 and the earlier B+ there is one difference that the case doesn't allow for. The LED's on the Pi3 are on the opposite side. The official Pi case has a couple of holes covered by clear plastic but they are on the wrong side for the Pi3 so I will need to drill a couple of holes.

The top of the official Pi case 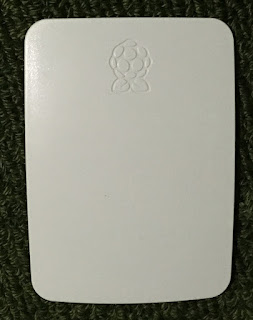 The underside of the top. 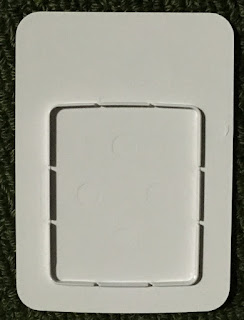 Top next to the rest of the case so you can see how it clips together. 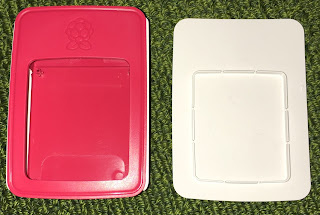 My original idea was to mount a 60mm fan on the top of the case. Unfortunately there is a ridge of plastic on the underside of the top piece that is exactly where the screws would go. 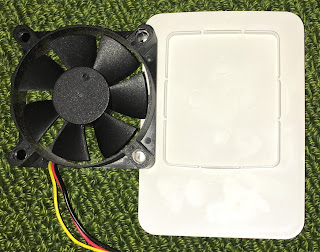 Plan B is to use a 40mm fan instead. I have ordered four Noctua 40mm 5 volt fans and already purchased a 38mm drill bit to cut the hole.

Lastly the copper heatsinks are proving difficult to find. I had one set left over from the Pi2's which also fit the Pi3. The larger SoC heatsink is 13x13x13mm in size and there is a slightly smaller one for the USB/network chip. There is one seller on eBay who sells a kit of two heatsinks with a miniature fan, however I don't want their fan. The other couple of companies I have purchased from previously don't seem to have any stock.

There are smaller (height) copper heatsinks available but they don't have enough surface area to be of any use. There are also plenty of aluminium ones but it isn't as efficient as copper.

Noctua have a C shaped PC cooler (NH-C14) that would be ideal for these if only they could shrink it to fit the Pi3.
Posted by Mark G James at 8:14 PM No comments: