Farm news
Its getting hot! I've had to reduce crunching to overnight at the moment, with the occasional all-day run when it stays cool for a day or so.

At the moment the farm is concentrating on CPDN RAPIT (full resolution ocean) tasks. They take around 10 days each. The problem with running these is they exclude everything except GPU work from running. To make matters worse I get errors while trying to upload their step files (which are approx. 52Mb each). I have a couple that failed but I can't report them either.


Project news - Asteroids
They finally came back online on Thursday last week. Their was then a lot of contention to upload completed work seeing as everybody else was trying to do the same. The back log of work getting uploaded was so great they had to run additional instances of their validator to get through all the uploaded results.

This week they released revised optimised apps which are a bit faster again and should resolve a bug that prevents completed tasks from validating. The project admins have indicated they will be looking to increase the size of work units now they have faster apps.
Posted by Mark G James at 10:46 PM No comments:

Farm news
No too much happening on the farm recently. As the weather has warmed up the Intel-GPU machines and the Raspberry Pi's are all that's running. They are running a mix of Asteroids and Einstein work, well they have been up until yesterday when they finished off all the Asteroids work.

I am still waiting on Parallella news, hopefully shipping confirmation. I suspect it will be October before hearing anything, which was their worst-case date for shipping to KickStarter backers.


Project news - Asteroids
They were recovering from their server crash last week when they had a power failure which took them off line for a day. They have been off-line with what was supposed to be a scheduled upgrade to a new server. It was estimated to take 8 hours but it has been off-line for more than 24 hours so far.


Project news - ClimatePrediction
They seem to have finally recovered from their failed server that were going to retire. They released a bunch of RAPIT (Full resolution ocean) models. They then suspended that lot and released a bunch more that the scientists wanted back sooner. All my Intel-GPU machines have picked up 7 each, so they will be busy for the next 10 days.
Posted by Mark G James at 11:27 PM No comments:

Farm news
We had a warm weekend so I took the opportunity to clean some of the rigs. These are a couple of the Fractal designs ARC Mini cases that have ASUS P8Z77 motherboards. They have a metal grill with foam inside which traps the dust coming into the case so one has to remove them and wash under a tap.

Without the front panel. Its naked! 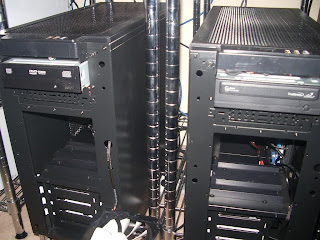 And the front panels 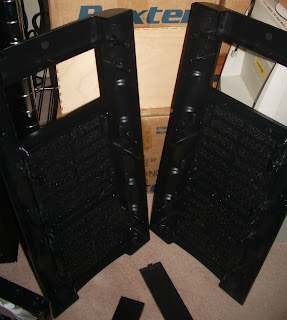 Project news - Asteroids
They are still having issues from their server failure last week. While they have got things going most of the files for the work units are missing so all the downloads are failing, It takes some hours running a script to keep asking the project for work before one can actually get them.

They released an updated optimised app today as well, which isn't the best timing. It would have been better to wait until the download issues are resolved. It seems to be about one third faster than the previous one.
Posted by Mark G James at 3:39 PM No comments:

Farm news
Its started warming up now so I have shut down the GPU crunchers. That leaves the Intel GPU machines and the Raspberry Pi's running.

I received my confirmation email from Adapteva confirming I was getting 2 Parallella boards but only one case. I have now paid for an additional case. I am waiting on further news from them at the end of this week which will probably just be an order confirmation.

I ordered some USB to 2.1mm barrel connector cables off eBay. The US power packs that Adapteva sell won't fit into an Australian power point. I have a number of 1 amp USB power packs now (after moving the Raspberry Pi's onto dual-USB power packs) so with these cables I should be "Parallella Ready".


Asteroids project news
Their server crashed and they were off-line for a few days this week. They are back up now and have had to put their database on another machine to reduce load on their main server. They have another server on order so there will be a scheduled outage at some point when they are ready to switch over.

Despite the server being off-line I have managed to climb up to 9th place on the rankings for the project. I expect I will be dropping soon because they have large numbers of download failures.

I have over 900 work units fail to download in the last day. These ones don't even start due to missing files. The project has set the error count to 20 so it will try and send the same work unit to 20 different people before marking the work unit as failed. The BOINC client thinks it has a comms error so it backs-off up to 24 hours and stops communicating with the project. I will have to switch to another project for a few days while they sort out this issue.
Posted by Mark G James at 11:50 PM No comments: