Milestones
Passed 11 million for Seti. GPUgrid is closing in on one too.


BOINC 6.12.25 released
6.12.23 came out on Thursday and failed to run. Its seems Microsoft's recent C run-time security fix earlier in the week has broken a number of programs, BOINC included. On Saturday we had 6.12.24 for Windows but it too failed and today we got 6.12.25 which resolves the issues.

EVGA precision is also getting errors since the Microsoft security patch.


CPDN full resolution ocean wu
They have these new work units with a full resolution ocean. I managed to pick one up which is currently estimating 490 hours to completion. Its been running for over 2 days already. That means the machine will need to be on 24/7 for at least 20 days to finish it. They have a 3 month deadline, so that doesn't leave much leeway.


GTX570 Sonic
Well its off and running. As expected its faster than the reference design. It also runs cooler than the reference design. Without having to resort to manually controlling the fan speed it seems happy to sit on 66 or 67 degrees C while crunching. Some of the "long" GPUgrid work units take around 11.15 hours on the Palit and 12.75 hours on the EVGA, so a bit of an improvement.


Kirk and the disappearing video card
As mentioned before I was going to remove the SSD from Kirk. I have now removed it. I had a few issues with software referencing the D: drive (which is now the C: drive) and had to reinstall the video drivers and BOINC. I still need to run it for a while before I can say its behaving but it would appear to be fixed.


Nvidia 270.61 driver
These were released during the week. There have been some reports of them down-clocking. The main advantage of these is they support Cuda 4.0. The Cuda 4.0 toolkit is at release candidate 2 status at the moment (ie hasn't been publicly released).
Posted by Mark G James at 9:10 PM No comments:

Here are some pictures of the Palit GTX570 Sonic card. The Sonic range from Palit are factory over-clocked graphics cards. 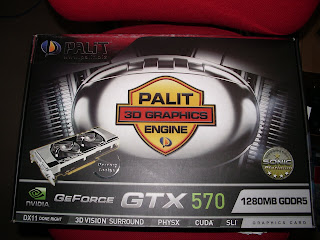 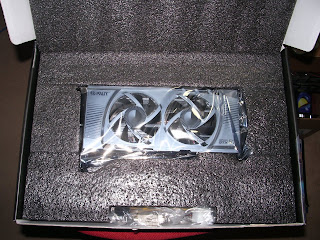 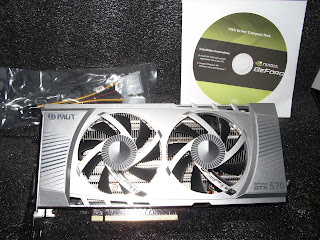 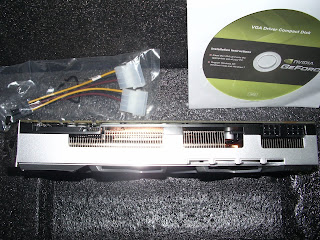 And lastly a screen shot from Vtune (available from the Palit website). As you can see despite the dual fans it still runs hot. 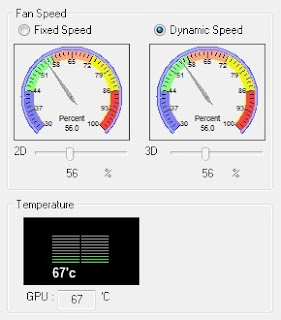 Milestones
Nothing new this week, but closing in on one for Seti.


Chrome
Seeing as Microsoft is pushing IE9 down the Windows Update pipe I have removed IE from all the machines. As mentioned in my previous post there are a few reasons not to use it. I have now installed Chrome on all machines instead.


File Server
After being back for a couple of weeks its now been fully commissioned and the old one is tucked in a corner of the loft. Backups and things are somewhat quicker than the old machine.

I still need to get WSUS installed on it to save on Windows updates. The virus scanner also has an update server module that can be installed to save on updates.


GPUgrid long work units
As if they weren't long enough they have a new batch of the long work units. The short ones take about 6 hours on my reference GTX570 and 10 hours on the GTX295 and GTX275. The long ones seem to be about 8.5 hours. I haven't tried running them on the old graphics cards.


GTX570 installed
I got a pair of Palit GTX570 Platinum Sonic cards. These are factory over-clocked versions of the GTX570. I have installed one in Chekov and got it going. It completed its 1st GPUgrid work unit yesterday. As expected it finished it off somewhat quicker than the reference GTX570. I will post more information about the new card later.


Kirk woes
I got the kingston memory late last week and installed it in Kirk. Its staying its having trouble with the graphics card now. Maybe the PCIe slot has gone faulty or maybe something else is causing the issue. I have swapped the graphics card with another one, but that didn't solve the problem. I'll look at removing the SSD next, once I have copied the data off it.
Posted by Mark G James at 11:25 PM No comments:

Milestones
Nothing this week.


Slow internet
I tracked this down to IPv6. Seeing as the old file server was Windows XP based it knew nothing about IPv6, however Windows Server 2008 R2 does. My network hardware and ISP don't support IPv6.

There is a registry change one can make to disable it, or you can right-click on your network adapter and choose properties -> IPv6 and untick it. This works fine until you reboot and then its back again.

Microsoft also have a "Fix it" that applies the registry fix, called MicrosoftFixit50444. The registry fix doesn't appear to work whatever way you apply it. Its probably been broken since Service Pack 1 as the fix pre-dates SP1. Despite that i've run it on all the Windows 7 machines and the file server.

[update]
It seems you need to power-off the machine for the fix to work. A reboot isn't sufficent. Having powered them all off and restarted them seems to have resolved the issue.


BOINC testing
We got 6.12.22  this week. Mostly screen saver fixes, but looks like they might get this one released soon. I've upgraded all the machines with it this weekend.


Memories
The memory for the i7-970 machine is on back order with Kingston. They think it will ship next week. Until it arrives i've been leaving it switched off.


Project news - Einstein
They are transitioning to a new run of the gravity wave search, which will no doubt add pressure to their servers as we need to download new data packs. They are currently looking at their scheduler with a view to not removing old data packs from client machines until all old work units have been completed.


Project news - Climate Prediction
They have a new type of work unit modelling the role of the Atlantic meridional overturning circulation (AMOC). They use more detailed ocean rules, as such they take more time to complete. Previously they would only run these on a super computer, however they are now doing this via distributed computing.
Posted by Mark G James at 2:30 PM 2 comments:

File Server
This weekend was spent setting up the file server. Everything has been copied over and its running quite happily at the moment.

I do however have a problem with the proxy server, Squid, taking a while for DNS lookups. It seems to take about 10 seconds or so before it finds a web site. After that the pages load nice and fast. The only thing thats changed is its gone from a Windows XP box to a Windows Server 2008 box. The rest of the network is unchanged and the configuration was unchanged.

From searching on the internet most people say its an issue with the DNS addresses not being defined, but its being picked up from the registry and pointing to the router's DNS address. I tried using the ISP's DNS server address but it doesn't make any difference. I'm now thinking its probably got more to do with the firewall on the server, so will do some experimenting with it.


Kirk issues
Kirk crashed last week and now seems to get errors on every Einstein CPU work unit, so i've stopped it running Einstein for the time being. I expect its the memory again. I've ordered some Kingston memory modules for it and they should arrive next week (currently they are out of stock).


Project news - Einstein
They are transitioning to a new search run with different work units, so its likely there will be lots of downloads of new data packs.


IE9 issues
It seems that it's not ready for prime time, even through its now being offered via Windows Update. A few problems I have had with it so far:
Chrome doesn't have these issues, and its still faster than IE9.
Posted by Mark G James at 12:23 AM No comments: