Finally I managed to get Einstein to the 3 million milestone. Below is a rather faint copy of the certificate. 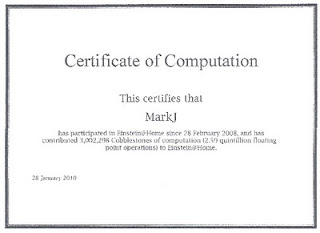 Memory (or lack of)
The shop still hasn't replaced the memory. It was meant to be available and tested by Monday. Monday came and went and when I rang they admitted it hadn't even arrived. Tuesday was a public holiday. So the other couple of machines (Sulu and Maul) await their memory upgrades.


BIOS upgrades
I've been on the ASUS web site tonight checking for what BIOS version is the current one. Apparently the one I installed (ver 0202) dates back to January 2009. The current one seems to be 1004 and is dated January 2010. It still doesn't support the i7-980x, so I may as well wait until they have a version that does.


Progress report
Well not much to report due to having machines off. Its hot and humid here in Sydney. As mentioned above Einstein got to its milestone.

They have also indicated there is a new Gravity Wave search program in the works. This is expected to cut run times down from around 8 hours to 3 hours. It won't be deployed until the next search run (S5R7).


Project news: GPUgrid
The guys at GPUgrid have been optimising their science app. There is a newer version in the works that is supposed to be up to 60% faster that the current one. They have also been trying to move away from using the CuFFT libraries provided by nvidia.

Unfortunately their testing of an OpenCL version of their science app proved that OpenCL on the ATI cards is not ready yet. Apart from being somewhat slower than a CUDA app, the ATI software causes system hangs or reboots. Hopefully later versions will correct these issues.
Posted by Mark G James at 10:56 PM