Milestones
I passed 6 million for Einstein during the week. Below is my certificate. 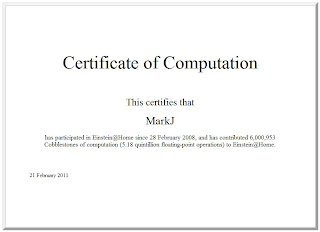 Machines in the shop
The new file server had one of its brand-new hard drives diagnosed as faulty. I will be dropping it back to where it came from for a replacement during the week. Unfortunately I got it online so I have to organise the swap over.

The 1Gb memory in the file server is getting replaced under warranty, hopefully with Kingston this time. Apparently Corsair don't make 1Gb sticks any more.

The 2Gb memory in Maul is getting replaced with more of the same. The distributor the shop purchased from doesn't want to replace it with Kingston.


BOINC testing
They have tweaked the testing criteria. Over all 6.12.15 seems fairly okay but there have been a few fixes applied that we are waiting for a new build. The next major version will address installer issues.


Project news - Einstein
We are currently analysing the S5 gravity wave run at the top end of their spectrum. They have decided they are going to use some of the data from S6 gravity wave run. Apparently its rather "noisy" but they believe they can use some of it but there will be varying run time due to tests they will use on it.


Project news - Orbit
Their initial grant has been used up. They applied for another one from NASA but it has been knocked back due to funding cuts to the NASA budget. That leaves the project without funding to continue.

It is probably one of the more useful projects to improve search strategies for near-earth objects that potentially will impact with the earth. Even political leaders might want to know they are going to be flattened by a rock before its too late to do anything about it.


Project news - Seti beta
They are looking at adding an extra search algorithm to their existing multi-beam work units. This will be tested on Seti beta before getting deployed to the main site.
Posted by Mark G James at 3:48 PM